Bhutan meaning Druk Yul - Land of the Thunder Dragon is landlocked between China and India.

The capital is Thimphu, its main exports are Electricity, timber, cement, agricultural products and handicrafts. 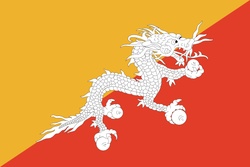 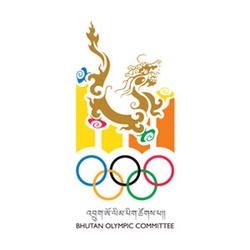 he Bhutan Olympic Committee was formed in 1983 and recognized by the IOC the same year. For each Summer Olympic Games since 1984, Bhutan has fielded male and female archers to compete in the kingdom's national sport.

Bhutan’s climate is affected by monsoons that bring between 60 and 90 percent of the region's rainfall.

The climate is humid and subtropical. Temperatures vary according to elevation.

Most of the central portion of the country experiences a cool, temperate climate year round. In the south, a hot, humid climate helps maintain a fairly even temperature range of between 15° C and 30° C year-round, although temperatures sometimes reach 40° C in the valleys during the summer.

The winter northeast monsoon brings gale-force winds down through High Mountain passes, giving Bhutan its name - Drukyul, which in the Dzongkha language mean Land of the Thunder Dragon.

The culture of Bhutan is among the oldest, most carefully guarded and well preserved cultures in the world. People of Bhutan have always been careful about conserving their centuries-old culture.

Bhutan has long maintained a policy of strict isolationism, both culturally and economically, with the goal of preserving its cultural heritage and independence. Bhutanese culture derives from ancient culture. This culture affected the early growth of this country