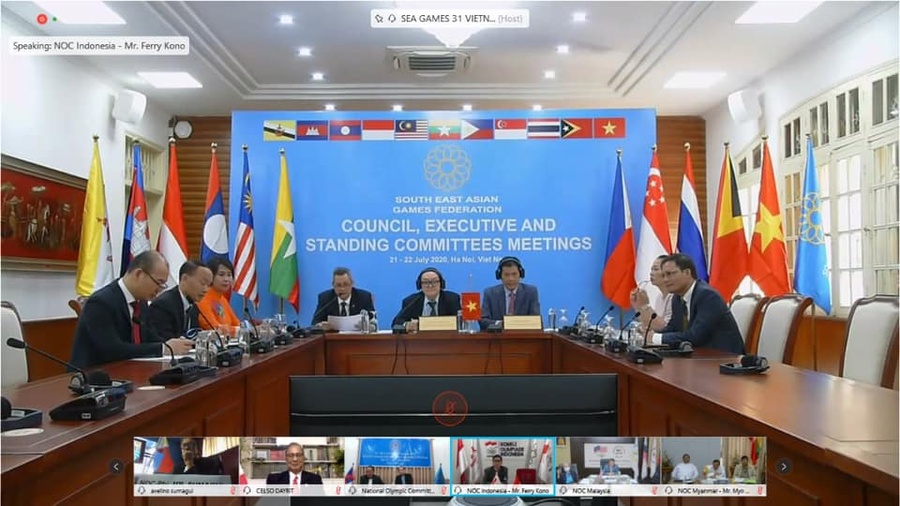 The meeting, which began at 9am, was chaired by Prof. Hoang Vinh Giang, Vice President of Vietnam Olympic Committee.

The Olympic Council of Malaysia was represented by Dato’ Seri Azim Zabidi. In attendance were Dato’ Mohd Nazifuddin and Dato’ Sieh Kok Chi.

The SEAGF Council meeting was held in the afternoon at 2pm and was chaired by H.E. Mr. Nguyen Ngoc Thien, Minister of Culture, Sports and Tourism of Vietnam, who is also the President of the Vietnam Olympic Committee.

The SEAGF Council accepted and confirmed the important matters as follows:

1. Accepted the Report of the 30th SEA Games Philippines 2019, which was presented by Mr. Ramon Suzara, COO of the Philippines SEA Games Organising Committee (PHISGOC).

2. Confirmed the host countries of the future SEA Games as follows:

3. Accepted the 36 sports as proposed by the Vietnam Olympic Committee to be listed in the programme of the 31st SEA Games 2021. The Organising Committee will consider the appeal by SEAGF member NOCs for the inclusion of 22 sports and three disciplines.

The next SEAGF Council, Executive and Standing Committees meetings are scheduled to be held in November 2020 in Hanoi.