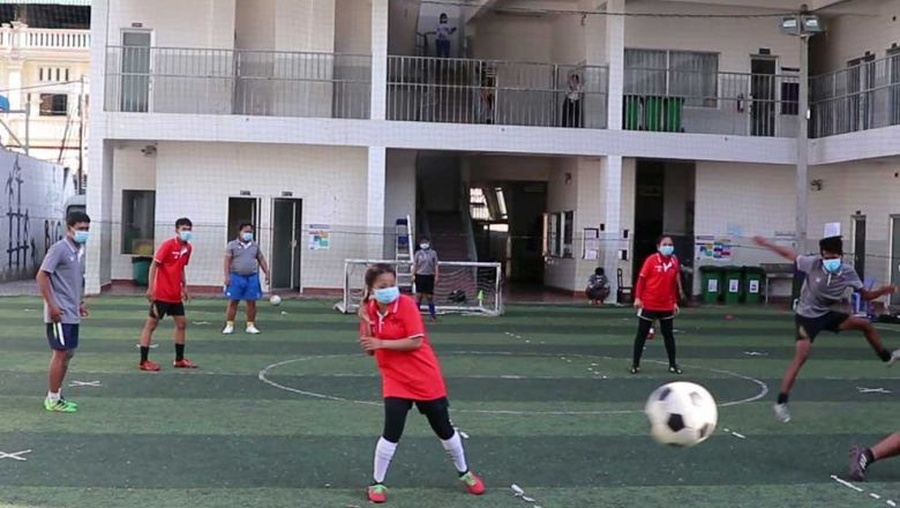 Phnom Penh, Cambodia, June 30, 2020: A new version of football has adapted the rules for Covid-19 and requires all players on the pitch to wear a face mask, keep a 2-metre distance from each other and control the ball for only five seconds at a time.

The Phnom Penh Post reports that coaches from the Indochina Starfish Foundation (ISF), a Cambodian charity that uses education and sport as a tool to change lives, created the new safety rules.

“We wanted to reinvent the game to make it safer and show kids on the streets how to avoid Covid-19,” says an ISF video.

“We needed new rules for a new world and these include temperature checks, hand-washing before and after the match, face masks, a 2-metre distance from each other, running from side to side and without physical attacks.”

The result of schools being closed also means many children and adults are playing football on the streets without taking precautions.

“Cambodian kids are in a difficult position. Schools have closed for their safety but, because most parents have to work, that means some are looking after themselves or are out on the streets playing football,” ISF Country Manager Vicheka Chourp says.

ISF’s Football Programme manager Samedy Yin came up with the core concept and developed the rules with ISF’s community coaches.

Players are given their own playing zones with a more side-to-side style of play rather than running forwards and backwards. Players who break the rules are sent into quarantine.

The first video of Social Distance Football posted last month was viewed more than 160,000 times in Cambodia, with at least 40,000 views from children aged 13 to 17, and the ISF is now rolling out the programme to other NGOs in Cambodia.