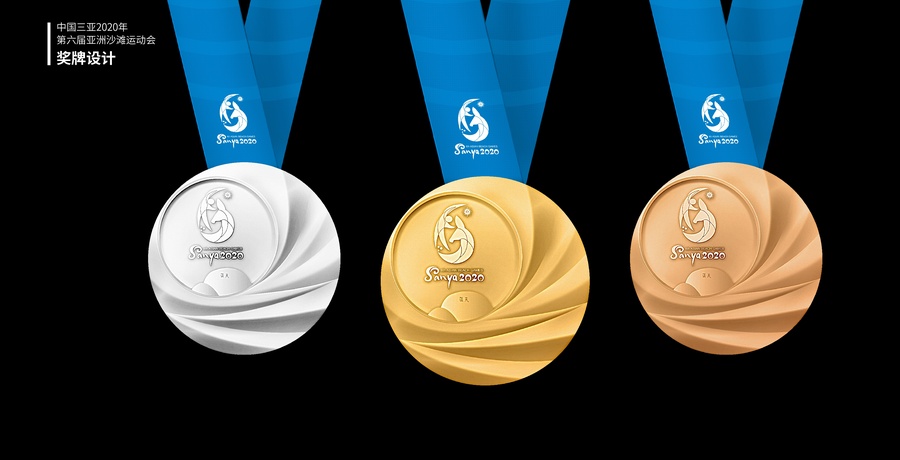 Kuwait City, Kuwait, June 17, 2020: The organising committee of the Olympic Council of Asia’s 6th Asian Beach Games Sanya 2020 has revealed the design of the medals.

The front of the medal comprises two parts. The first part is a circle symbolising the brilliance of the sun and the moon; within the circle is the emblem of the Asian Beach Games and the image of the Tianya rock formation representing the history and culture of Sanya.

The second part decorates the rest of the medal and depicts the natural scenery of Sanya – the sweeping bays, waves and beaches.

The back of the medal features the Olympic Council of Asia logo, highlighted by the dragon, falcon and shining sun, and the side of the medal is engraved with the phrase "Welcome to Tianya Haijiao" in English.

Tianya Haijiao, meaning “the edge of the sky and the rim of the sea”, is the most famous tourist hotspot in Sanya due to its spectacular rock formations at the foot of Maling Mountain.

The OCA’s Director General, Husain Al-Musallam, said the medal design captured the history and culture of Sanya - a tourist city in tropical Hainan Island known for its long, golden beaches and luxurious resorts - and the spirit of the Asian Beach Games.

“The OCA would like to congratulate the Sanya Asian Beach Games Organising Committee on the very attractive medal design,” he said.

“The design includes all the key elements of Sanya 2020 and depicts the sand and sea as well as the major tourist hotspot of the city.

“Following the launch of the slogan, the emblem and the mascot last year, this is another major milestone on the road to the Asian Beach Games Sanya 2020.”

The Vice Mayor of Sanya and Deputy Secretary General of SABGOC, Zhou Jun, added: “The medal is one of the most important visual image elements of the Sanya Asian Beach Games.

“The inspiration for the design concept comes from an ancient Chinese poem ‘The bright moon rises above the sea, bringing us all together at this very moment.’

“Integrated with the history, culture and natural scenery of Sanya, the overall shape of the medal indicates that we welcome all guests to visit Sanya at any time.”

The sixth edition of the OCA’s Asian Beach Games 2020 will take place from November 28 to December 6 and feature 17 sports, 19 disciplines and 93 events at four venue clusters.