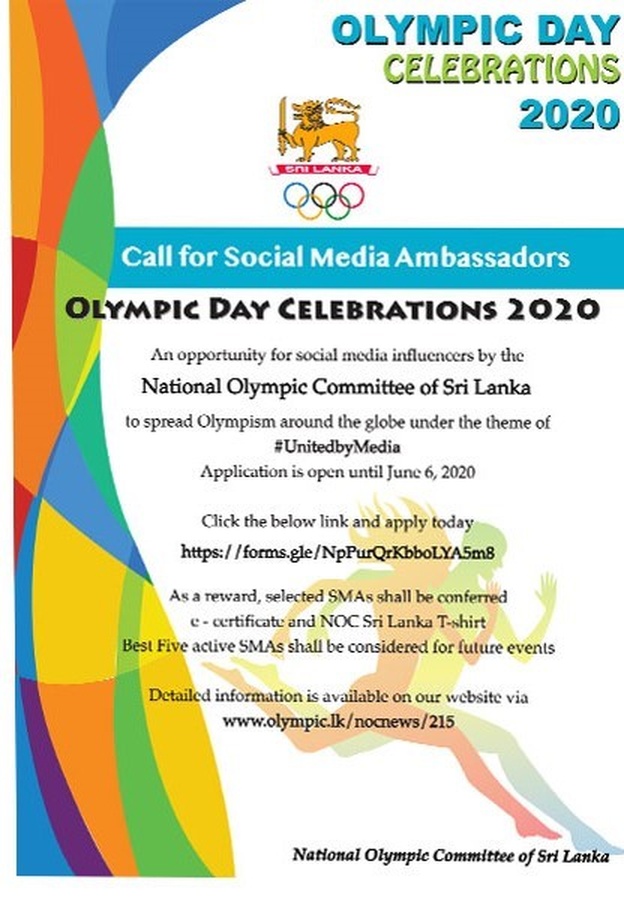 Colombo, Sri Lanka, June 2, 2020: The National Olympic Committee of Sri Lanka has called for social media enthusiasts to apply for the position of Social Media Ambassador to be part of the celebrations on Olympic Day 2020, which falls on June 23.

This year’s Olympic Day was scheduled to be held in Kalmunai, in the Eastern Province of Sri Lanka, but, due to the COVID-19 crisis, the event has been cancelled. Sri Lanka NOC will now host Olympic Day indoors at its headquarters, Olympic House in Colombo.

Since the mass participation for the traditional Olympic Day Run will not be possible due to the pandemic, the NOC will conduct activities such as talks, discussions and knowledge and experience-sharing virtually.

In an attempt to reach out to a wider audience, the NOC has decided to identify social media influencers from each district around the country – 25 – to promote Olympism by sharing or reposting these posts and activities. They will be the Social Media Ambassadors.

Anyone who is 16 years and above can apply, as well as organisations who are willing to be part of the programme and having official social media pages.

The closing date for applications is Saturday, June 6.