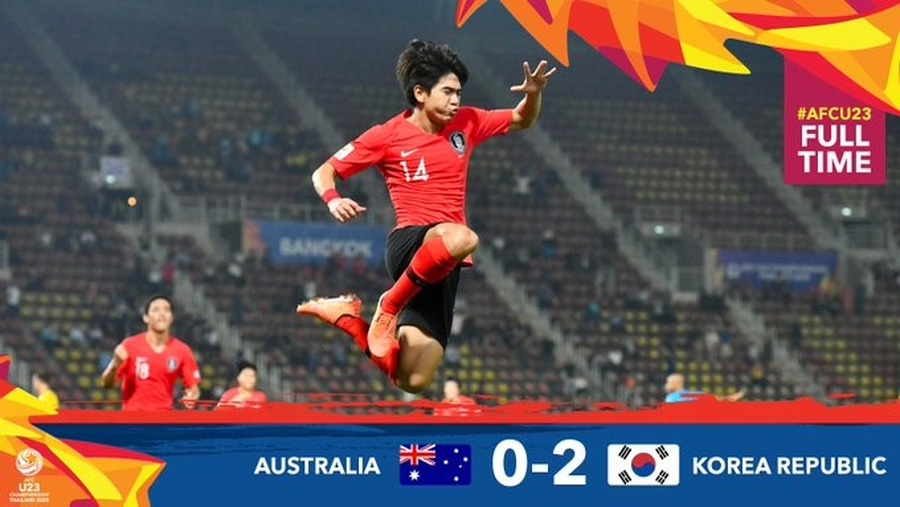 Bangkok, Thailand, January 23, 2020: South Korea and Saudi Arabia booked their tickets to the Tokyo 2020 Olympics by reaching the final of the men’s AFC Under-23 Championship.

The third and final place for Asia in the men’s football competition at the Olympics will be decided between Australia and Uzbekistan in the third-place play-off on Saturday, January 25.

Japan as hosts have automatically qualified for the Olympics.

Goals from Kim Dae-won and Lee Dong-gyeong secured a 2-0 victory for Korea over Australia and set up a final against Saudi Arabia on Sunday, January 26.

Saudi Arabia defeated Uzbekistan 1-0 in the other semi-final on Wednesday, January 22 in Bangkok. A late Nasser Al Omran strike was deflected into the net by Abdullah Al Hamdan to guide Saad Alshehri’s charges through to a title showdown.

Both Asian powerhouses, having booked their respective tickets to the Tokyo 2020 Olympics, will now seek to lift the AFC U23 Championship for the first time. Korea have sealed a ninth consecutive appearance at the Olympics while Saudi Arabia qualified for the first time since 1996 Atlanta.

The third-place play-off promises to be a sizzler on Saturday with both Australia and Uzbekistan having to shed their disappointment at losing in the semi-finals.

Australia are bidding to make the Olympics for the first time since the 2008 Beijing Games while Uzbekistan are seeking a first-ever appearance at the global showpiece.