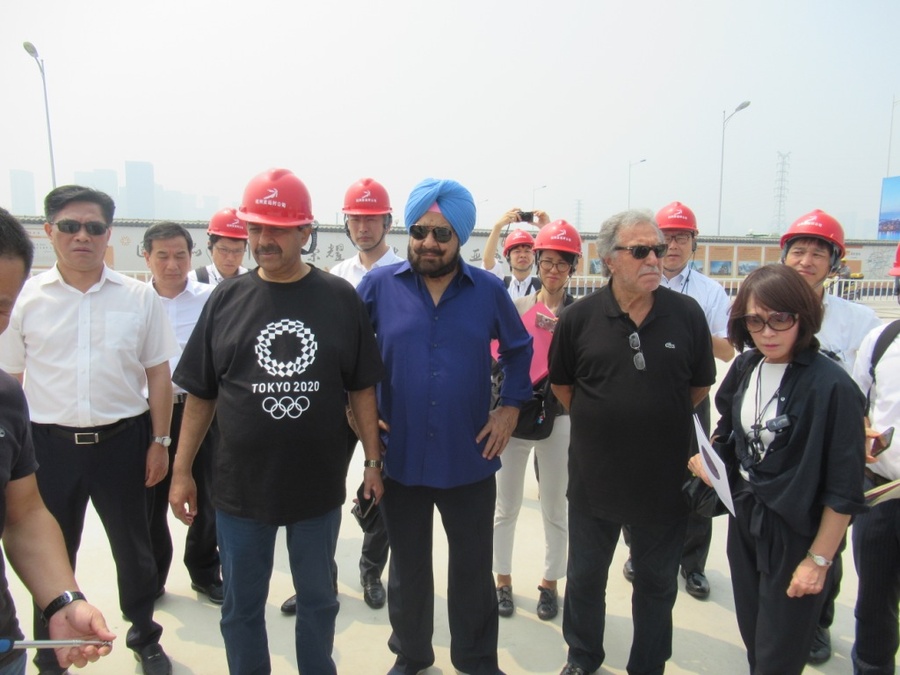 Hangzhou, China, September 10, 2019: The Chairman of the Olympic Council of Asia Coordination Committee, Raja Randhir Singh, declared himself “satisfied, impressed and happy” with the preparations for the OCA’s 19th Asian Games in Hangzhou, China on Tuesday.

Following a venue tour on Tuesday morning, the OCA Honorary Life Vice President said there was already an Asian Games vibe to the city in terms of stadiums and accommodation three years before the event.

“We have seen some very nice venues and also the plans for and the start of construction of the Asian Games Village, as well as the International Expo Centre that will accommodate the Main Media Centre,” he said.

“It was very interesting to see the venue for the water polo competition and how they will transform it from the current basketball hall into a swimming pool for the Asian Games.

“We also saw a very solid football stadium and a gymnasium for the gymnastics competition, so many of the competition venues are already there, including the Main Stadium.

“Overall I think the Asian Games Village will be amazing, and my colleagues were very impressed, satisfied and happy with the preparations with three years to go.”

The 19th Asian Games will be held from September 10-25, 2022, in Hangzhou, capital of Zhejiang province in eastern China. Hangzhou will be the third Chinese host of the OCA’s premier event, following Beijing in 1990 and Guangzhou in 2010.

The venue tour, for which the OCA Coordination Committee members were joined by representatives of organising committee HAGOC, the Chinese Olympic Committee, the General Administration of Sport in China and delegates from 2026 Asian Games hosts Aichi-Nagoya in Japan, began at the Dragon Sports Centre.

The football stadium has a capacity of 55,000, the gymnasium 8,000 and the water polo venue 3,000. The water polo venue is a basketball hall, but this will be converted into a swimming pool in 2021 – one and a half years before the Asian Games. The other aquatic events will be held in a new aquatic stadium under construction next to the main stadium, which is known as “Big Lotus”.

The Asian Games Village is located 3km from the main Olympic park and will accommodate 20,000 people: 11,000 in the Athletes’ Village, 5,000 in the Technical Officials’ Village and 4,000 in the Media Village. The village is being constructed by three private developers and will be sold for housing after the Asian Games.

The Main Media Centre will take up two exhibition halls on the ground floor of the Hangzhou International Expo Centre.

The OCA delegates will attend a three-year countdown ceremony on Tuesday evening before the second OCA Coordination Committee meeting on Wednesday.