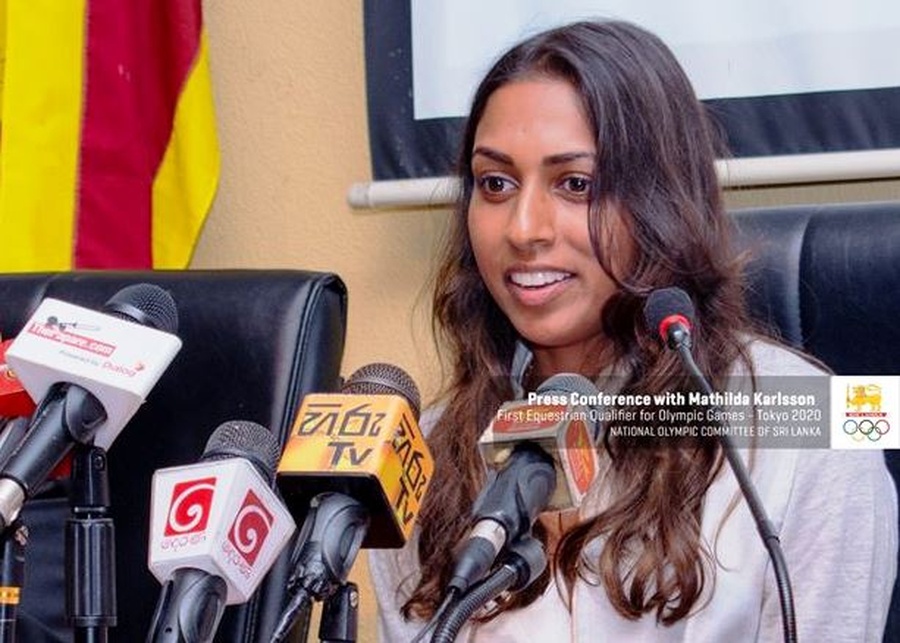 Colombo, Sri Lanka, January 10, 2020: The National Olympic Committee of Sri Lanka has announced that equestrian athlete Mathilda Karlsson has become the first Sri Lankan athlete to qualify for the Olympic Games in Tokyo this summer.

Mathilda, 35, was born in Sri Lanka in 1984 and was adopted by Swedish parents when she was only three months old.

She grew up in Kristianstad in the south of Sweden and started her equestrian career at the local riding club. There, Mathilda developed her love and passion for horses and showjumping.

“I was lucky to grow up in a very loving family that gave me all the support a child could wish for. My family gave me the opportunity to develop into the person that I am today,” says Mathilda.

In 2018, Mathilda decided to return to her Sri Lankan roots and started to compete for the country of her birth. Mathilda made this decision after her first visit back to Sri Lanka in 2017 on holiday; there she fell in love with the beauty of the country and the kindness of the people.

As a result, she decided flying the Sri Lankan flag and set herself a goal: To be the first jumping athlete in history to qualify and represent Sri Lanka at the Olympic Games.

“However, I feel very proud and supported representing Sri Lanka. For me, it was the right thing to do.”

Through dedication and hard work, Mathilda has now reached her goal. Together with Chopin VA, Mathilda has throughout 2019 competed against the best in the world and consistently picked up world ranking points.

Mathilda and Chopin VA eventually finished second on the Olympic ranking for South East Asia and Oceania, which secured them a ticket to Tokyo.

Mathilda has a truly special bond with her Olympic horse Chopin VA, an 11-year-old approved stallion by Casall x Coriano, having been a part of Chopin VA’s life since he was born at Grönwohldhof in Holstein, Germany.

“We have been inseparable since the day he was born,” Mathilda says. “Chopin and I have a very special connection; we are like a best friend. At times, it feels like we can read each other’s minds.

“Chopin VA thinks I’m the best rider in the world because he doesn’t know anything else,” Mathilda says.