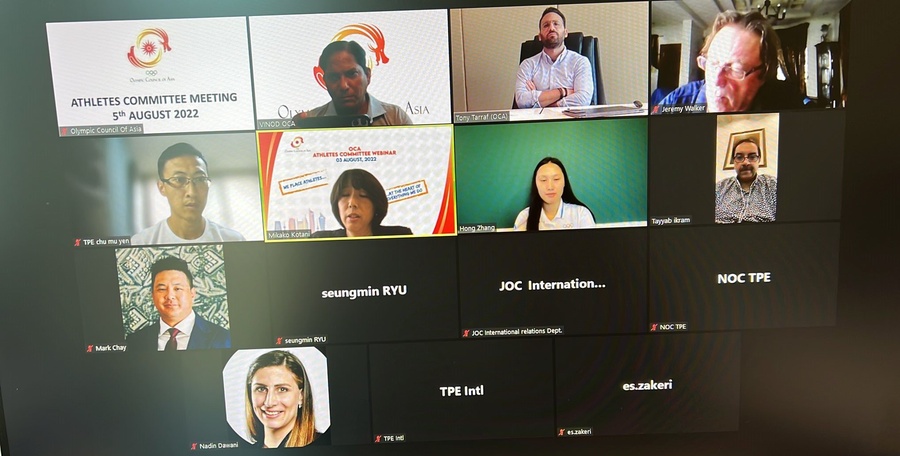 Tokyo, Japan, September 5, 2022: The Olympic Council of Asia’s Athletes Committee is well on the way to establishing an athletes committee in each of its member National Olympic Committees after a prolonged push throughout the five zones of the continent.

“It was a very wonderful experience for me to meet all the Athletes Committee members,” she said. “I received many positive comments after the Webinar.

“We had 40 Athletes Committees attending, including 24 Chairs of Athletes Committees, and we had two NOC athlete representatives from Lebanon and the United Arab Emirates. These are the ones who still don’t have an Athletes Committee yet but, with the support of the OCA, they are getting there. They are almost there to establishing one.

“By the time we have the next OCA General Assembly in Cambodia in October, hopefully I can announce that all the NOCs in Asia have an Athletes Committee.”

“We still have one more year to go, but the athletes had to wait one extra year, just like the Tokyo Olympics, to participate in the next Asian Games, so I would like to make the next Asian Games as exciting as possible with all your support,” she told the committee members.

“I think it is time to start brainstorming and discussing about what we can do to support the athletes during the Asian Games,” she added, while acknowledging the health protocols and restrictions were not yet clear one year out from the event.

Chair Kotani made two proposals to the OCA HQ regarding the 19th Asian Games: to support Ukraine with donations of sports gear and equipment; and to present the most active Athletes Committee in Asia with an award at a special ceremony to motivate and inspire the athletes committees around the continent.

“Let’s stay together, work together, keep strong communications for the benefit of the athletes towards the Asian Games,” she concluded.