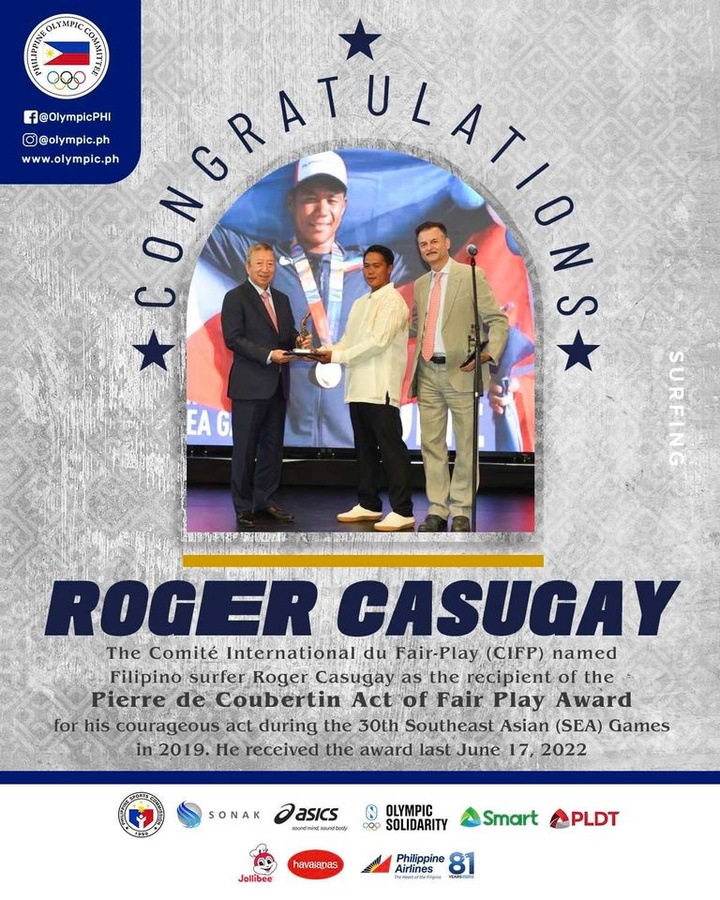 Casugay made global sports headlines during the 30th SEA Games in the Philippines in 2019 when he rescued a rival surfer from Indonesia, Arip Nurdihayat, during a head-to-head race.

The Indonesian athlete had been knocked off his surfboard in rough seas and was struggling to survive in the high waves caused by Typhoon Tisoy.

The Filipino favourite put competition to one side and devoted his attentions to saving his fellow competitor – an act of sportsmanship amidst the heat of competition in the biennial regional sports fest.

Casugay’s deed did not go unnoticed in the Olympic movement, and the CIFP named him the winner of the Pierre de Coubertin Act of Fair Play Award. Due to the pandemic, he could not collect his award in person in 2020 or 2021 - until this month, when he was honoured at the CIFP World Fair Play Awards Gala in Budapest, Hungary on June 17.

“Well done, Roger! Your act of selflessness will forever be cherished. Your Philippine Olympic Committee family is proud of you,” the POC said in a statement.

The prestigious CIFP World Fair Play Awards such as Trophies, Diplomas and Letters of Congratulations are awarded to athletes and private individuals from all over the world selected by the CIFP for their remarkable acts of fair play or outstanding careers conducted in the spirit of fair play.