Mayhem at My Dinh as Vietnam retain men’s football gold 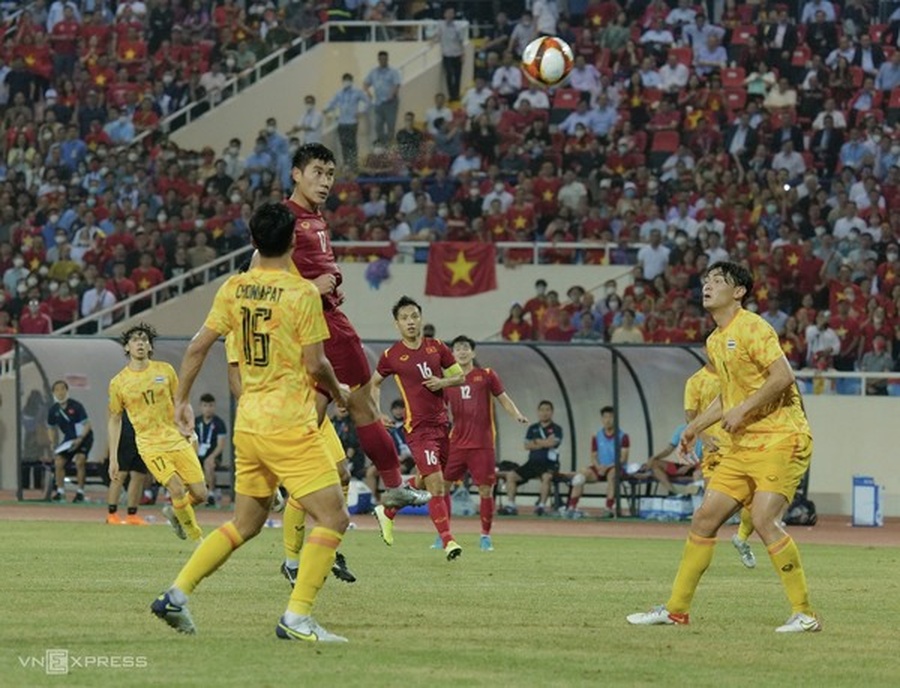 Vietnam's Nham Manh Dung scores the only goal of the game with a towering header. © Ngoc Thanh/VN Express

Hanoi, Vietnam, May 22, 2022: Vietnam brought the 31st Southeast Asian Games to a sensational conclusion by beating arch rivals Thailand 1-0 in the men’s football final at the My Dinh National Stadium in Hanoi on Sunday night.

The only goal of the game between two well-matched teams was scored by Vietnam forward Nham Manh Dung in the 83rd minute.

Nham found space between Thailand’s two central defenders to meet a superb cross from left back Phan Tuan Tai and head the ball into the far top corner.

The goal produced a deafening roar from the red-shirted Vietnam fans in the stadium, and the home team survived four tense minutes of injury time to hang on to their precious lead – and retain the gold medal they won in the Philippines in 2019.

The SEA Games party was only just beginning, however, and immediately after the final whistle the leafy boulevards around the stadium were packed with proud Vietnamese on motor cycles and in cars and trucks waving the distinctive red and yellow flag and sounding their horns and vuvuzelas.

This noisy celebration was not going to end any time before daylight, and the whirling sirens of the police merely added to the cacophony.

The My Dinh National Stadium only holds 40,000 spectators and the 20,000 on sale to the public disappeared in 30 minutes. This left half the stadium free for VIPs, SEA Games guests and members of the 11 National Olympic Committees, but tickets were still like gold dust.

Despite heavy rain for most of the day, there was still an air of excitement and anticipation on the walk to the stadium one hour before kick-off, and the rain lashed down almost until the match kicked off at 7pm. At this point, the rain cleared and the match was played in near perfect conditions on and off the pitch. It was quite a sporting spectacle, and a terrific advert for the SEA Games in general.

Thailand looked to be in control of the match for much of the game but didn’t attack with the same verve of energy as Vietnam.

After a goalless first half with few chances between them, the match picked up in the second half and Thailand began to show more adventure and self-belief going forward.

Once the Vietnamese had seen off this threat, however, they went for the kill with all the fire and energy they could muster. The crowd sensed this and urged them forward – and got their reward with the brilliant header from Nham with just seven minutes remaining.

The noise was so loud nobody could hear the announcement of how many minutes of injury time would be added on, and this made for a nervy finale as the Thais continued to search for an equalizer to take the game into extra time. It was not to be, though, and Vietnam held on for an incredible victory that was celebrated around the country.

The men’s team’s 1-0 victory completed a golden double in football after the women’s team edged Thailand by the same score on Saturday night.