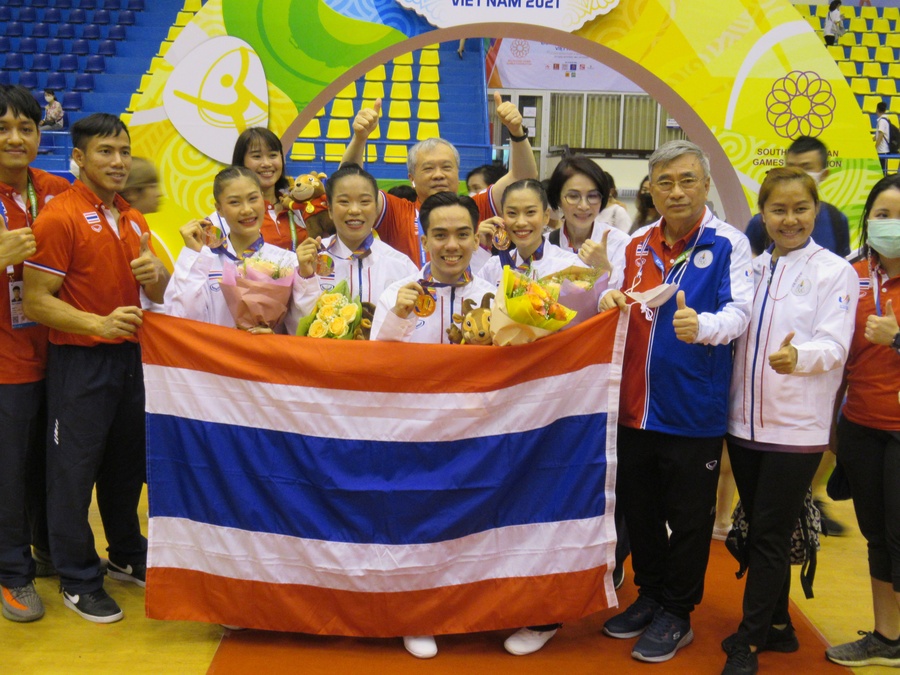 Gold medal-winner Chanokpon is joined by the bronze medal-winning Thailand trio for a group photo. © OCA

Hanoi, Vietnam, May 21, 2022: Thai athlete Chanokpon Jiumsukjai appreciates that aerobic gymnastics is not the most popular sport in town - but it didn’t prevent him from producing a master class to thrill spectators at the 31st SEA Games on Saturday.

“I was able to achieve everything I wanted to do in my performance and win the gold medal, so this is the perfect day for me,” he said, after scoring the highest mark of the four competitors in the men’s individual final of the two-day aerobic gymnastics competition.

“Even though this sport is not so popular in Thailand and in the world, I think it’s a very exciting and vivid sport.”

The Quan Ngua Gymnasium in Ba Dinh District of Hanoi City was a colourful setting for the competition. With it being a Saturday morning, the gym was packed with school groups in matching coloured uniforms and families with young children.

The organisers built up the excitement with an exhibition by a local aerobic dance club, after which athletes from the competing nations joined them on stage to create a festive atmosphere.

This dazzling welcome set the scene for a morning of breathless, high-octane routines that drew appreciative cheers from the local fans, regardless of the flag the athletes were representing.

“I think people like to come and watch this sport because it’s very beautiful to be a part of,” added Chanokpon, who is 20 years old and took up aerobic gymnastics aged 10.

“I want to entertain the spectators and also to inspire the young kids watching. It’s fun for everyone.”

Chanokpon, who hails from Kanchanaburi Province, is a full-time athlete and trains seven hours a day to build up his strength and to perfect the intricate moves.

All this hard work paid off as he was awarded 19.600 points for the three elements. He was the first competitor on stage, and none of his rivals could match this.

Phan The Gia Hien took the silver medal for Vietnam with 18.800 and Cambodia’s Chanbory Choeun finished third with 18.450.

The trio event followed the men’s individual and featured four teams. This time Vietnam came out on top with 20.478 followed by Cambodia with 19.300 for silver and Thailand with 17.588 for bronze.