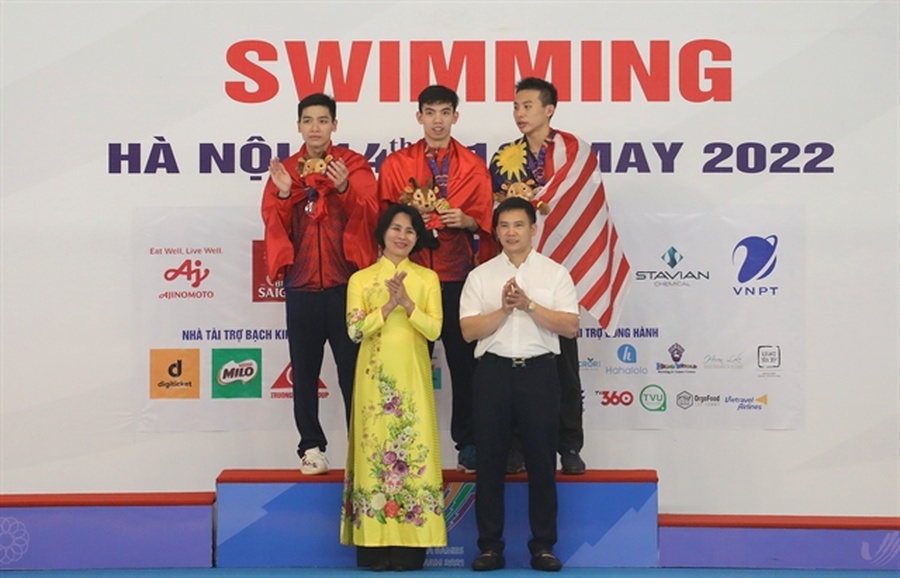 Hanoi, Vietnam, May 19, 2022: Singapore’s powerful swimming team won four of the six gold medals on offer on the final night of SEA Games action on Thursday – but they were still upstaged by a local hero.

Take a bow Nguyen Huy Hoang, the 22-year-old Tokyo Olympian whose sensational finish in the men’s 200m butterfly created a deafening din inside the My Dinh Aquatic Sports Palace.

Hoang had already powered to victory in the men’s 800m freestyle in the first race of the night, clocking 7 minutes, 57.65 seconds, but his best was yet to come in the penultimate race of the six-day swimming competition.

Singapore’s Ong Jung Yi, in lane 5, looked in control of the race but the crowd sensed there was something special brewing as Hoang began his challenge in lane 6 – in front of the packed grandstand.

Ong, 21, was tiring in the centre of a furious two-pronged onslaught by Hoang and Thailand’s Navaphat Wongcharoeun in lane 4 and saw the gold, and silver, slip away on the finishing wall.

This was Hoang’s fifth gold of these SEA Games following victories in the 400m, 800m and 1500m freestyle as well as the 4x200m freestyle relay, and he has now won eight gold medals in three SEA Games.

The big question is can he step up and beat Asia’s big two China and Japan and claim gold at the next Asian Games, having won a silver in the 1500m and 800m bronze at Jakarta 2018.

Singapore added four more gold medals to their tally on the last night in the pool, the highlight being a new SEA Games record of 21.93 seconds for Teong Tzen Wei in the men’s 50m freestyle, beating the previous mark of 22.25 in 2019.