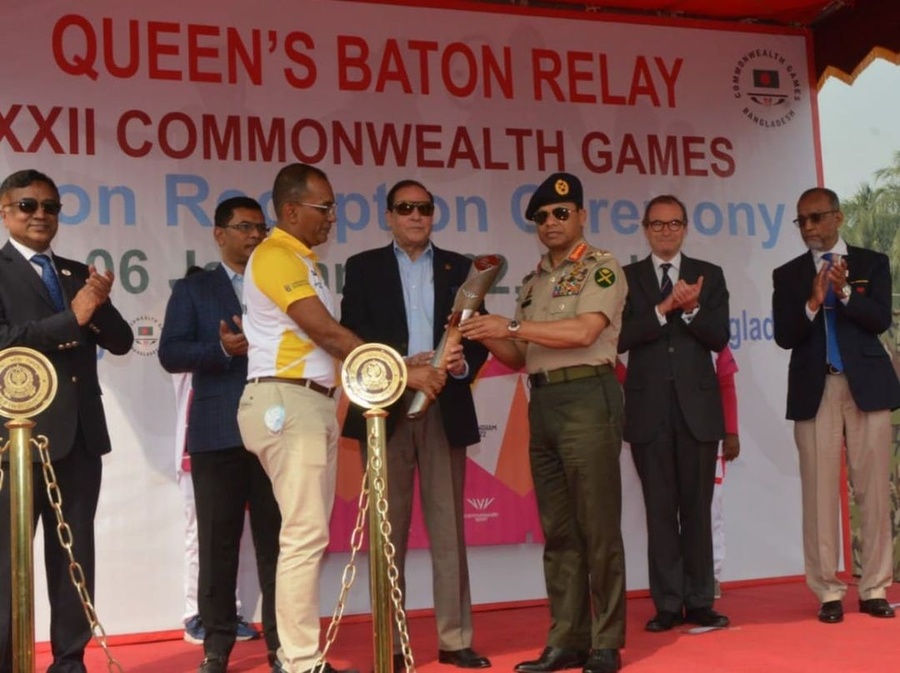 Dhaka, Bangladesh, January 7, 2022: The President of the Bangladesh Olympic Association and Bangladesh Army Chief of Staff, General SM Shafiuddin, received the Queen's Baton for the Commonwealth Games 2022 in Dhaka on Friday, January 7.

The Queen’s Baton ended a four-day stopover in Sri Lanka and departed for the Bangladeshi capital Dhaka early on Friday morning in the company of Sri Lanka NOC official and Baton Manager in Sri Lanka, Chandana Liyanage.

Liyanage handed over the Baton to Gen. Shafiuddin, who is also the head of the Commonwealth Games Association in Bangladesh.

The Queen’s Baton Relay will now take place over the next few days in Bangladesh, the 26th leg of the journey spanning 72 nations and territories across the Commonwealth and ending at the Opening Ceremony of the Birmingham Games on July 28.

During its time in Sri Lanka, the Queen’s Baton Relay and CGA Sri Lanka took part in numerous activities in Colombo, the hill capital Kandy and in the tea plantations of Hatton. Sri Lankan Commonwealth Games medallists Chinthana Vithanage and Dinusha Hansani Gomes had the honour of being the first Baton-bearers.

Before the Baton departed the shores of Sri Lanka, Suresh Subramaniam, President of Sri Lanka NOC, said: “I am filled with pride that Sri Lanka had the opportunity to host the Queen’s Baton Relay and be part of this momentous journey. Not only did it give us strength to celebrate the spirit of Sri Lanka but it represents the coming together of communities across the whole of the Commonwealth.”