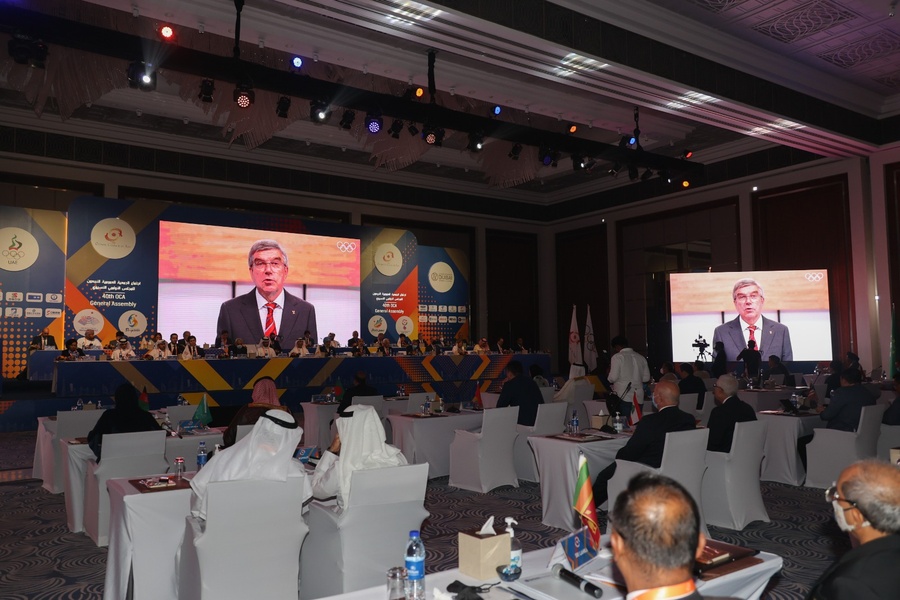 President Bach pointed out that having three Olympic Games in a row in Asia – PyeongChang 2018, Tokyo 2020 and Beijing 2022 – spoke volumes for the vision Asia has for the future.

“This is a vision defined by ambition, confidence and a real can-do attitude. The Olympic Council of Asia shares this vision as you set the course for the future of sports in Asia,” Bach said.

“Building on this solid foundation you have every reason to face the challenges ahead from a position of great strength and stability,” he added.

Addressing the Asian NOCs, Bach revealed the strong partnership between the IOC and the OCA in sports had also seen positive results in other areas like the United Nations sustainable development goals, gender equality, climate change and education.

“We are joining hands to strengthen the role of sports in society allowing us to better pursue our shared mission to put sport in the service of humanity.

Following the success of Tokyo 2020, President Bach pointed out that Asia was ready to take centre stage once again with the hosting of the Olympic Winter Games Beijing 2022, and bringing to an end an Asian Olympic cycle.

“Your General Assembly is taking place at an auspicious moment allowing you on the one hand to look back at the success of the Asian Olympic cycle so far, while on the other hand giving you the opportunity to look ahead to Beijing and beyond.

“All your NOCs and athletes played an essential part in writing history in Tokyo. This is something you can all be extremely proud of. Without your determination, these Olympic Games would not have happened in such a successful and safe way. Therefore please accept my heartfelt thanks for your invaluable contribution to the success of these Olympic Games,” Bach said.

He added that as countries all over the world were starting the long journey of recovering from the pandemic, the OCA General Assembly was sending a very important message that sports and athletes everywhere were ready to contribute to rebuild a more human-centred and more inclusive society.

“I wish you fruitful discussions and a very successful General Assembly. See you soon in Beijing, China, Asia,” he concluded.