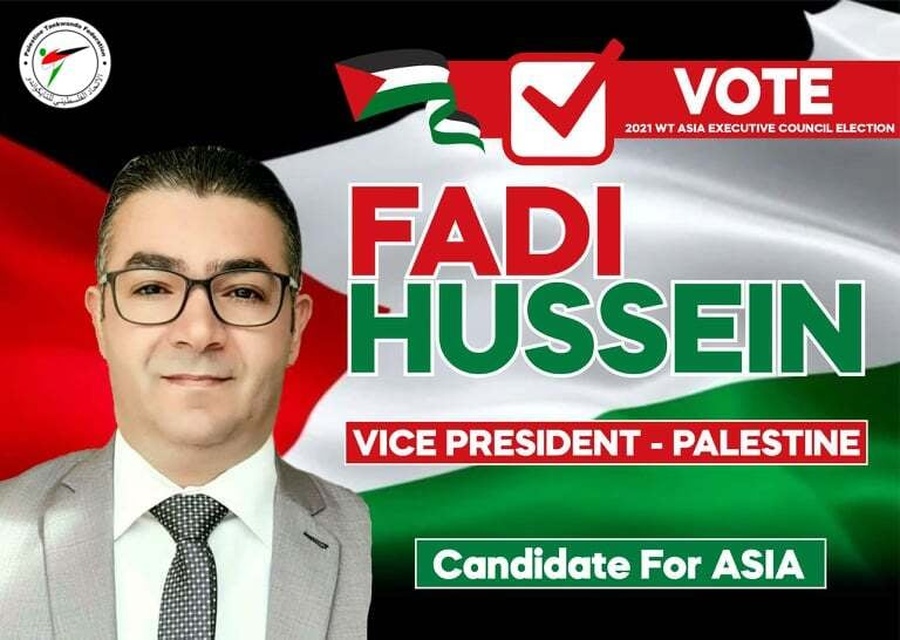 Jerusalem, Palestine, September 23, 2021: The Palestine Olympic Committee is hoping that the national taekwondo federation will have a voice at the continental level next month.

Palestine NOC reports that the local taekwondo federation has nominated Fadi Hussein for a place on the Asian Taekwondo Union Council.

Elections will be held during the ATU General Assembly on October 10 and the candidate from Palestine is one of 16 hopefuls for 11 places as a member of the ATU Council.

Fadi Hussein, 45, is vice president of the local taekwondo federation and has over 35 years’ experience in the sport as player, coach, executive board member and vice president.

Palestine NOC said that the Palestinian candidate had the support of many Arab and Asian countries due to the standing of the organisation at the continental level and the technical and administrative experience of Fadi Hussein.

The Palestine Taekwondo Federation reports that nominee Hussein is a 7th Dan taekwondo black belt and was one of the most prominent members of the national team, winning a gold medal in the Arab Championships in Morocco in 1997.

Federation President Dr. Bashar Abed Aljawad Saleh firmly hopes that Palestine will have a seat on the council of the ATU through Hussein in order to enhance the standing of Palestine at the continental level and further boost the technical and administrative development of the sport at home.

In his campaign message, Hussein says: “As Asia has the largest population, we have to lead and develop taekwondo in Asian countries to keep Asia at a high level in organising the largest and most successful tournaments in the world.

“This leads to Asia achieving high-ranked Asian athletes in the next Olympic Games in Paris 2024.”