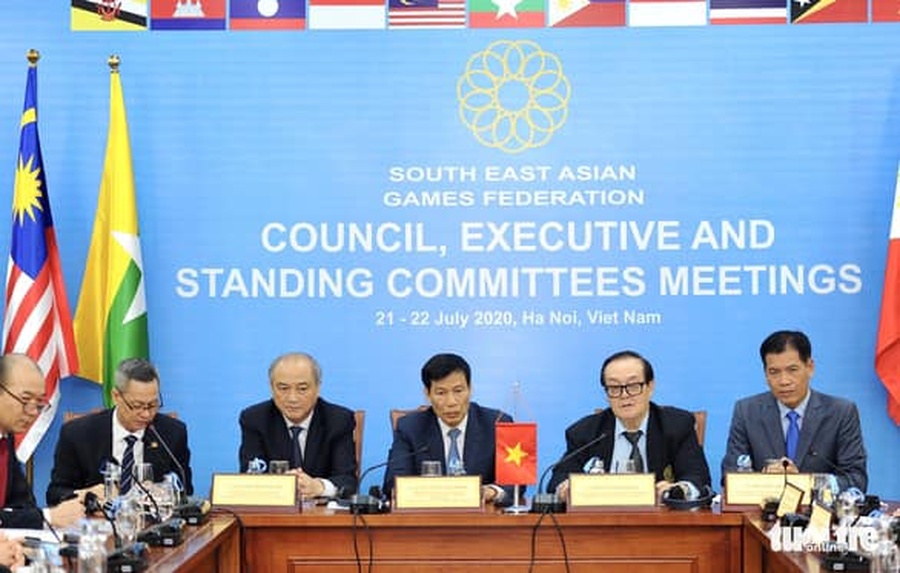 Prof. Hoang (second from right) at a SEA Games Federation meeting in Hanoi in July 2020.

Kuala Lumpur, Malaysia, September 12, 2021: The Olympic Council of Malaysia has paid tribute to Prof. Hoang Vinh Giang, Vice President of the Vietnam Olympic Committee, who passed away on Saturday, September 11.

In a statement on its Facebook account, the OCM said Prof. Hoang had made a tremendous contribution to the development of sports in Vietnam throughout his life time.

“He was named ‘Architect of Vietnam Sport’ by the people of Vietnam,” the statement said.

“During his tenure as Director of the Hanoi Sports Department (1988 to 2006) and Vice President/Secretary General (1998 to 2012) then Vice President (2012-2021) of the VOC, he introduced and developed a number of Olympic sports in Vietnam namely badminton, fencing, gymnastics, shooting, table tennis and taekwondo.

“He also played a significant role in the Olympic Movement in Vietnam by playing the leading role to organise the 22nd South East Asian Games Vietnam 2003, the first ever SEA Games hosted by Vietnam, and subsequently Vietnam became the overall champion.”

The OCM also highlighted his role in the organisation and coordination of the Olympic Council of Asia’s 3rd Asian Indoor Games in Hanoi and Ho Chi Minh City in 2009 and the 5th Asian Beach Games in Danang in 2016.

Prof. Hoang was still playing an active role as Deputy Chairman of the Organising Committee of the 31st SEA Games Vietnam 2021, which were postponed from this November until next spring due to the pandemic. He had been a council member of the SEA Games Federation since 1998.

“The demise of Prof. Hoang Vinh Giang is indeed a great loss to the Olympic Movement in South East Asia. May his soul rest in peace,” the OCM statement added.