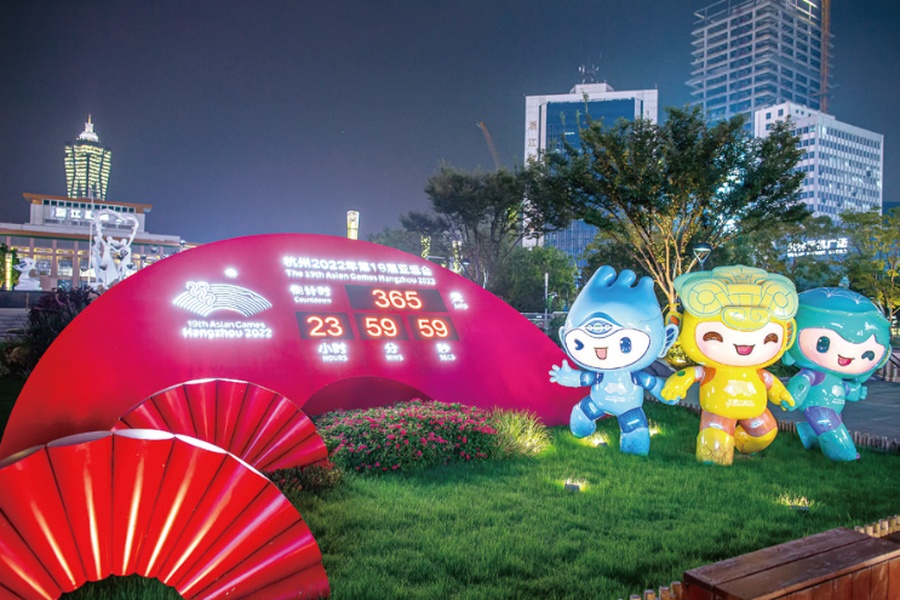 The ceremony, at the Hangzhou Olympic Sports Centre, was hosted by the Hangzhou Asian Games Organising Committee and streamed live on the official HAGOC website for Asian National Olympic Committees to follow around the continent.

The Director General of the OCA, Mr Husain Al-Musallam, extended an invitation to the athletes and National Olympic Committees of Asia to attend Hangzhou 2022, and the Chair of the OCA Coordination Committee, Raja Randhir Singh, sent a video message.

Raja Randhir, who is an Honorary Life Vice President of the OCA, said it was unfortunate he could not be in Hangzhou due to the pandemic but said the OCA was paying great attention to this important milestone.

He recalled watching the Asian Games flag handover at the 18th Asian Games closing ceremony in Jakarta in 2018 and now there was only one year to go to the 19th Asian Games, which will open on September 10, 2022.

“The past two years have not been easy for the world due to the pandemic, and it is especially true for the preparation for the Games,” said Raja Randhir.

“But I am very delighted to see that, thanks to the concerted effort from everyone, preparations for Hangzhou 2022 are very well underway.

“Sport is a symbol of unity, resilience and courage. I hope that the Asian Games will encourage people and give them strength to fight the pandemic and move forward - as the slogan for Hangzhou 2022 says, ‘Heart to Heart, @Future’.

“The Hangzhou Asian Games is only one year away from now and we are looking forward so much to the moment that we can all reunite. On behalf of the OCA, I would like to send my best wishes to you all. I hope that the 19th Asian Games are a complete success, and that all our participating athletes achieve remarkable results. I look forward to seeing you soon in Hangzhou.”

Mr Al-Musallam welcomed all participants to the countdown ceremony.

“We are exactly one year from the biggest multi-sport event on the Asian continent,” he said. “I have great pleasure in inviting the athletes and all the member National Olympic Committees of the Olympic Council of Asia to participate in the 19th Asian Games to be held in the beautiful city of Hangzhou from 10-25 September 2022.

“Wishing you all the best of luck and looking forward to seeing you all in one year’s time.”

The theme of the 60-minute ceremony was “Expecting”, reflecting the hope of the people of Hangzhou, China and Asia for a successful Asian Games. The programme included the unveiling of the torch design and the official uniforms.

The torch is named “Eternal Flame” and symbolizes the light of Chinese civilization passing from generation to generation over 5,000 years as well as the unity of athletes and the high-tech manufacturing capability of Zhejiang province in eastern China.

The official uniforms have been produced by Asian Games sports apparel Prestige Partner 361 Degrees in two categories: for the Olympic Council of Asia representatives and for referees, judges, technical delegates and jury members.

The sports uniforms for the OCA are white with purple and yellow designs and the formal attire is predominantly purple.

The sports uniforms for the referees and technical officials are white with purple designs and the formal wear is blue and white.

The ceremony also included video link-ups with previous Chinese hosts of the Asian Games Beijing 1990 and Guangzhou 2010, as well as messages from 2018 host Jakarta-Palembang and 2026 host Aichi-Nagoya.

The 19th Asian Games will run from September 10-25, 2022 in Hangzhou, capital of Zhejiang province, and five co-host cities. There will be 40 sports, 61 disciplines and 482 events in 55 competition venues, and 5 million tickets available for the 600 sports sessions and ceremonies. 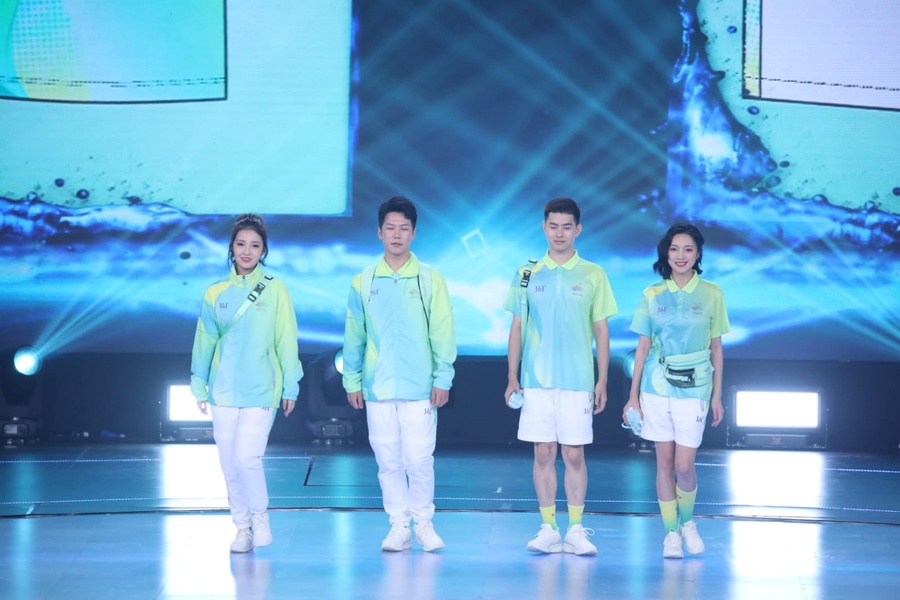 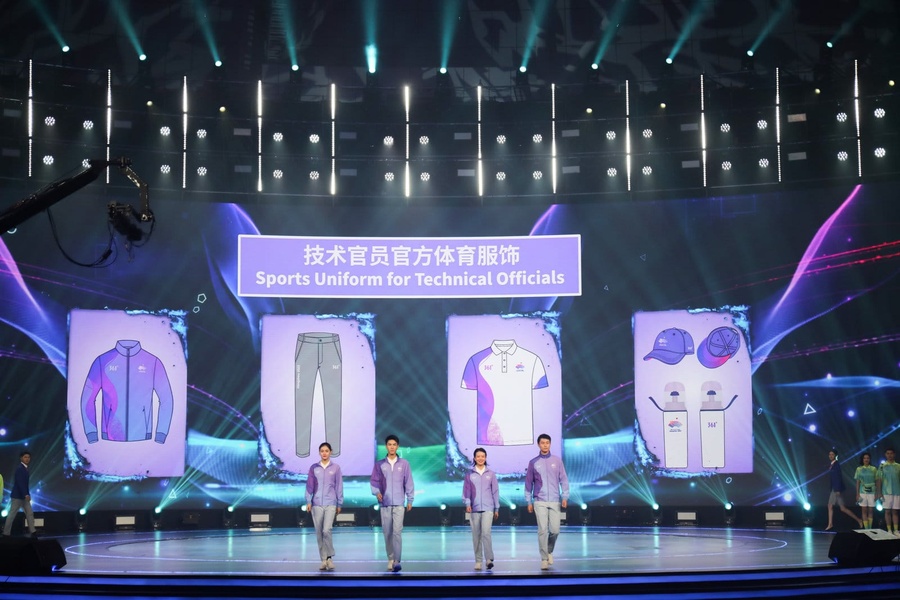 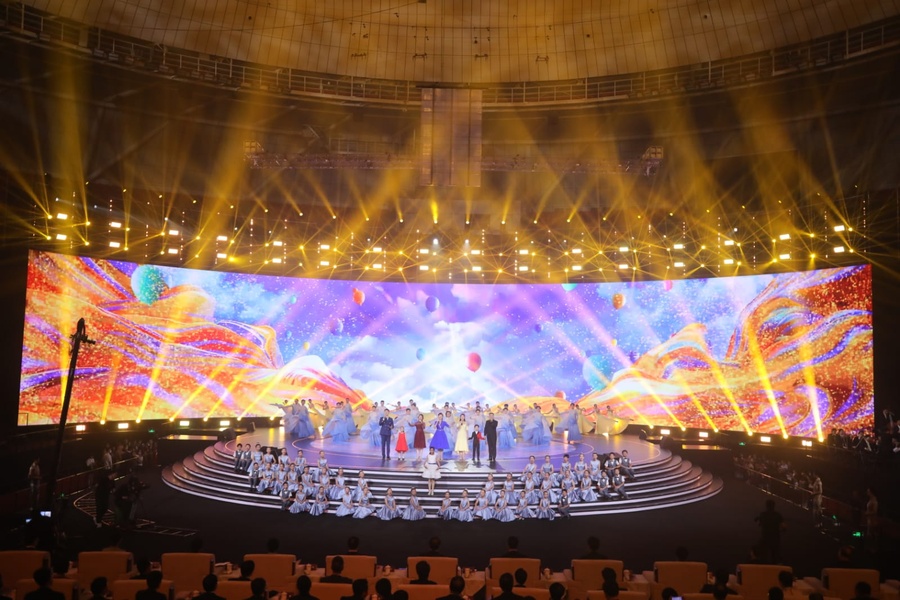