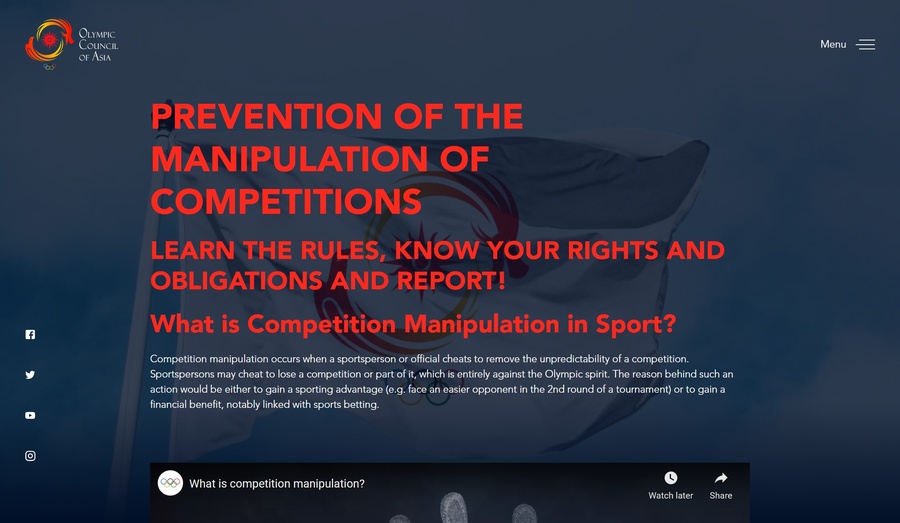 The webinar will be hosted by the OCA along with the Olympic Movement Unit on the Prevention of the Manipulation of Competitions (OM Unit PMC), which is part of the IOC’s Ethics and Compliance Office. Interpol, the United Nations Office on Drugs and Crime and other international organisations will be among the presenters.

The webinar will take place on September 29, starting at 10am Kuwait time and running for three hours. The webinar seeks to raise awareness of the matter among the NOCs and analyse the steps that NOCs need to take in order to prevent relevant risks.

These steps include the adoption of rules, raising awareness and adopting intelligence activities.

In a circular to the Asian National Olympic Committees dated August 24, the OCA Director General, Husain Al Musallam, encourages the NOCs to invite National Sport Federations and the Ministry of Sport to attend the webinar as observers.

The OCA and OM Unit PMC are also asking the NOCs to appoint their own single point of contact for all matters related to this issue in order to enhance coordination and communication on all activities.

The objectives of the webinar will be outlined by Evangelos Alexandrakis from the OM Unit PMC and by Tony Tarraf of the OCA. The webinar will then be conducted in two sessions.

The first session – “Activation of sport organisations on the prevention of the manipulation of competitions” – includes an introduction, the work of the OM Unit PMC, the role of the NOC Single Point of Contact, awareness-raising activities as a means of prevention, the Beijing 2022 Winter Olympics and the role of the NOCs, and the activation of the OCA, particularly regarding upcoming events.