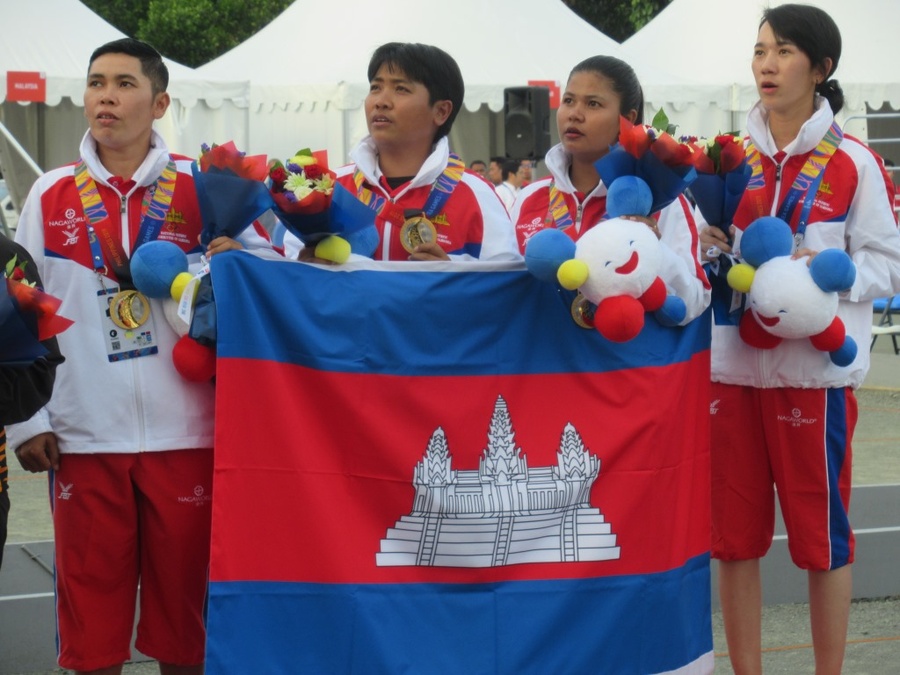 Clark, Philippines, December 5, 2019: Cambodia’s petanque team produced a timely gold medal at the 30th Southeast Asian Games on Thursday. The women’s triples team beat Malaysia 13-4 in the final under a burning sun at the picturesque petanque village just a short walk from the official SEA Games hotel within the vast grounds of the former United States air base at Clark, 100km north of Manila. It was only Cambodia’s second gold medal of this 30th SEA Games and meant a lot to the four team members. “I feel very proud to win this gold medal and also because Cambodia will be hosting the SEA Games for the first time in 2023,” said Sreng Sorakhim, 20. “Hopefully this gold medal will attract a lot more attention to petanque back home in Cambodia and also to the SEA Games coming to our country. If I can stay healthy and my play is good then I hope to be a member of the team in 2023.” The other three members of Cambodia’s women’s triples team, including one reserve, were Un Sreya, Khoun Yary and Duong Dina. Petanque, also known as boules, is a remnant of French colonial rule in Indochina and was introduced in Cambodia over 100 years ago. Vietnam and Laos – the two other countries that made up Indochina under the French – were also among the eight countries competing as the game has spread its roots around Southeast Asia. “I have been playing petanque for five years,” adds Sreng. “We train indoors at the National Stadium in Phnom Penh and we always change players in the team. But for the SEA Games we have played together for six months.” Sreng credits her love of petanque to Ke Leng, Cambodia’s women’s world champion in France in 2013. “From that moment in 2013 I loved petanque,” she adds. “And when I played I found I was born with talent in petanque.” In the women’s triples, Malaysia took the silver and Laos and Myanmar won the two bronze medals. In the men’s triples, Malaysia beat Thailand 13-11 in a tense final and Vietnam and Laos won the two bronze medals.