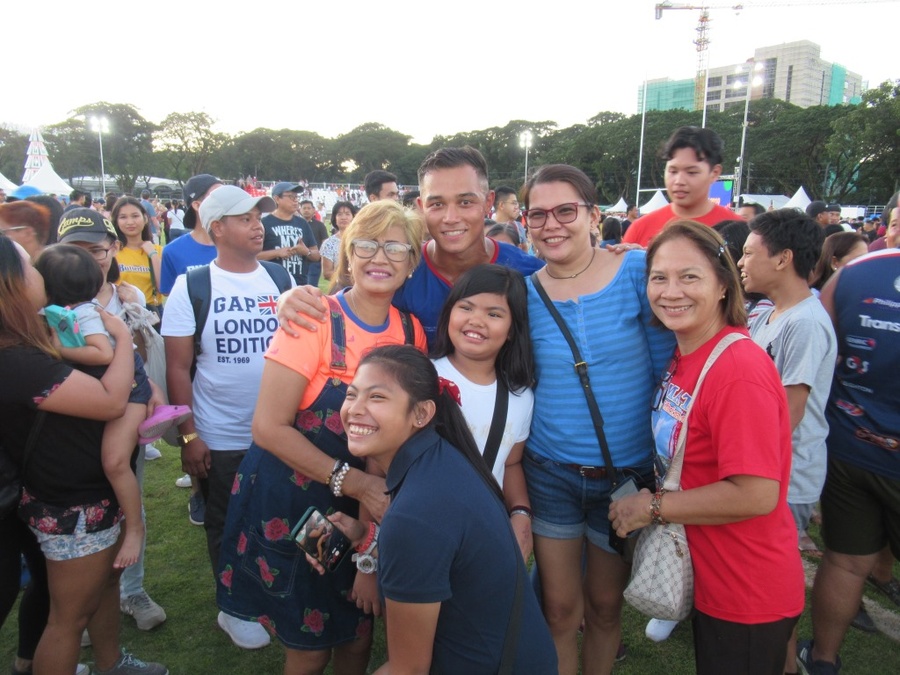 Clark, Philippines, December 8, 2019: The Philippines went rugby crazy at the 30th Southeast Asian Games on Sunday. The temporary stands at the former parade ground of the United States military in Clark, Pampanga, were rocking as the Philippines won the men’s rugby sevens final – making up for the defeat of the women’s team at the hands of tough and tenacious Thailand just a few minutes earlier. The atmosphere was electric, and all three of the home team’s tries in their 19-0 victory over Malaysia were greeted by mass hysteria from these proud new rugby fans. The Philippines’ third try early in the second half to make it 19-0 ended the match as a contest and all that was missing to spark the celebrations was the final whistle. Any hopes of a calm and controlled ending to the proceedings before the formal victory ceremony were dashed as hundreds of joyful spectators invaded the pitch and surrounded the Philippines players to take souvenir selfies of a memorable SEA Games experience. Players of other teams, too, were congratulated and asked to pose for photographs at the end of an entertaining and hard-fought two days of sevens rugby involving six teams in both women’s and men’s competitions. In the women’s final, the Thais were much too strong for the Philippines and won 17-7. Thanaporn Huankid show lightning speed to break for the opening try after only 25 seconds and Rattanaporn Wittayararonnayut added a second down the left wing in the fifth minute for 10-0 at halftime. Erica Mae Legaspi gave the home side hope when she sprinted up the right wing early in the second half and the successful conversion reduced the arrears to 10-7, only for Thanachporn Wandee to score Thailand’s third try with some alert support play to close the scoring at 17-7. The men’s final was up next and proved to be the next step in a bruising rivalry between the Philippines and Malaysia. One player from each side was shown a yellow card for a high tackle in the opening skirmishes before Robert Lucerno crossed from a scrum in the fifth minute. Patrice Ortiz added the second in the left-wing corner right on the half-time buzzer and the Philippines turned round 14-0 ahead. When Justin Villazor scored the third try from a right-wing breakaway just one minute into the second half for 19-0, the gold medal was not in doubt. Malaysia beat Indonesia 19-12 to take the women’s bronze and Thailand defeated Singapore 12-5 to finish third in the men’s event.