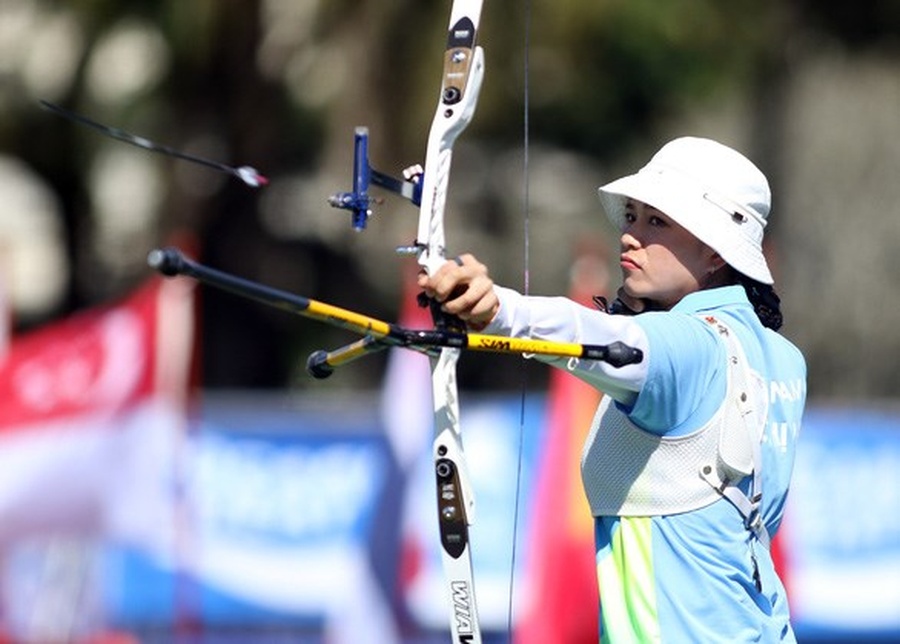 Clark, Philippines, December 8, 2019: There was a fair chance that Vietnam’s Loc Thi Dao watched the Saturday evening movie in her room to relax before the archery competition on Sunday. The movie in question was Robin Hood – and the Vietnam version of this archer extraordinaire collected three gold medals in one day at the 30th Southeast Asian Games. She began with gold in the recurve women’s team along with Do Thi Anh Nguyet and Nguyen Thi Phuong in the morning session and followed up with a second title in the recurve mixed team with Nguyen Hoang phi vu in the afternoon. On a sweltering day and firing into a bright sun, Loc completed her golden hat trick by defeating Myanmar’s Hnin Pyae Sone in the individual final 6-4. Vietnam’s team manager, Truong Giang Bui, said Loc Thi Dao was reaping the rewards of a tough training schedule. “She trains seven hours a day – three in the morning and four in the afternoon,” he said of the 26-year-old archer, who has been a member of the national team for 10 years training in Hanoi. “This is her fourth time at the SEA Games so she has a lot of experience and today you could see how mentally strong she was – her concentration to play in three finals on the same day and win three gold medals.” Indonesia’s Hendra Purnama, 22, won a golden double on Sunday with victory in the recurve men’s team with Arif Dwi Pangestu and Ega Salsabilla and in the individual recurve final against Oo Htike Lin of Myanmar. Hendra had to wait a little while for confirmation of his individual victory as his second shot of 9 in the fifth set was upgraded to 10, giving him the final set 29-28 and 6-4 in set points. The archery competition finishes on Monday with the compound events in women’s and men’s team, mixed team and individual women and men – five gold medals in all.

Loc Thi Dao of Vietnam won a hat trick of gold medals in archery on Sunday. © www.vietnamplus.vn
Share on: