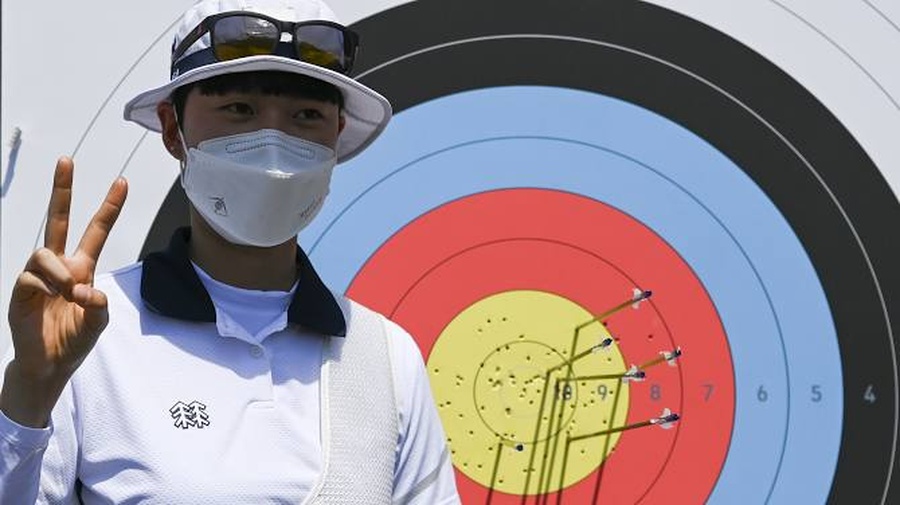 An San of Korea gestures after setting a new Olympic record of 680 in women’s archery on Friday, July 23. The Korean pair were much too strong for Bangladesh in the mixed team event on Saturday. © Reuters/Clodagh Kilcoyne

Tokyo, Japan, July 24, 2021: To be the best you have to beat the best – and Bangladesh’s mixed archery team found out just how tough that will be at sun-drenched Yumennoshima Park Archery Field on Saturday.

Drawn against the mighty Koreans in the round of 16, Bangladesh suffered a 6-0 defeat, losing all three sets despite improving round by round.

“We were a little bit nervous at the start but we came back and were more focused,” said Ruman Shana, the veteran of the Bangladeshi pair at 26.

“In the third set we shot 38 but it still wasn’t enough. This is the experience of the Koreans.

“This is a learning experience for us. We will go day by day and step by step and learn to be more focused.”

His partner, 17-year-old Diya Siddique, said she tried her best but it did not work out on the day.

Bangladesh made a very nervy start, scoring only 30 points, including a 5, from their four arrows – two from each archer in the mixed team event. The Koreans went 9-10-9-10 for 38 and an eight-point margin to take the first two set points.

In the second set, Bangladesh improved to 33, but the Koreans needed only 35 – low for them – to add two more set points.

The majesty of the Korean archers was on full view in the third set, as An closed it out with a perfect 10 for 39-38.

The 20-year-old An, with an Olympic record 680, and 17-year-old Kim (688) had both finished top of the rankings in women and men and mixed team the previous day to set the mark for their rivals as the archery competition unfolds.