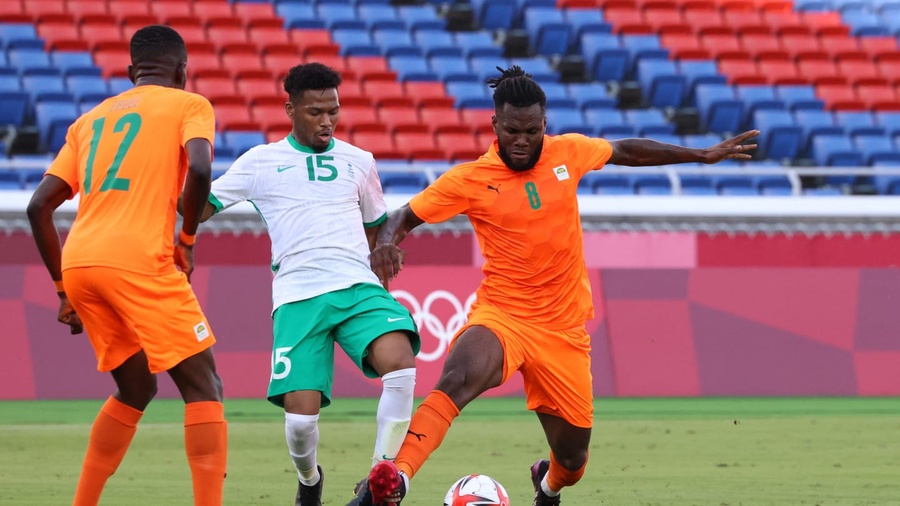 Yokohama, Japan, July 22, 2021: Saudi Arabia’s 25-year wait to play in the Olympic Football Tournament ended with a 2-1 defeat to Ivory Coast in their Group D opener at International Stadium Yokohama on Thursday evening.

The Saudis finished runners-up to Korea in the Asian qualifying competition in Thailand to book a place in the Olympics for the first time since Atlanta 1996 and only the second time in history.

But they are still waiting for their first point after losing all three games in Atlanta and opening here with another slender defeat.

Their remaining Group D matches are against Rio 2016 silver medallists Germany and gold medallists Brazil, so they will need to pull off at least one major surprise to finish in the top two and advance to the quarter-finals.

Saudi Arabia’s coach, Saad Al Shehri, said he was satisfied with the overall performance of his team as he expected his opponents to be well prepared physically and very technical.

“We can return with more experience for the next game against Germany and try to take the three points,” he said, pointing out that the Ivory Coast players were all with European clubs.

“We have previous experience of coming back in the World Cup and the Asian Cup after losing our first game and have proved our capability on the field.”

The Saudis, nicknamed the “Green Falcons”, looked very comfortable in the first half, with captain Salman Al Faraj controlling the centre of the park alongside Ali Al Hassan and Yasser Al Shahrani linking well with playmaker Salem Al Dawsari on the left flank.

Midfielder Sami Al Naji came close to opening the scoring on the half-hour mark, but his delicate chip from just outside the box was palmed to safety by the Ivory Coast keeper Eliezer Ira from under his own crossbar.

When the Africans took the lead in the 39th minute it was somewhat against the run of play. Captain Max Gradel, who had shown little Olympic spirit in haranguing the referee, Matt Conger of New Zealand, crossed low from the left and Saudi centre half Abdulelah Al Amri diverted the ball past his own keeper, Mohammed Al Rubaie, for an own goal.

While there was an element of luck about Ivory Coast’s opening goal, there was no doubting the quality of the Saudi reply in the 44th minute.

Again, Al Shahrani played a key role, passing inside to Al Dawsari, who made room for himself cutting across the face of goal before curling a glorious right-foot shot into the far corner for 1-1 at half-time.

Ivory Coast took the lead for the second time in the match on 66 minutes when Franck Kessie of AC Milan outfoxed the Saudi defence on the edge of the box before lashing a fierce left-foot shot past Al Rubaie for 2-1. It was certainly a goal to match the radiance of their fluorescent orange strip.

Saudi substitute Ayman Al Khulaif appealed for a penalty after going down just inside the box in the 78th minute, but the claim was denied after a check by VAR, and five minutes later Al Dawsari hit the bar as the Saudis searched for a second equalizer.

The match had been niggly all the way through and ended with a minor skirmish after which Ivory Coast substitute Aboubacar Doumbia was shown a red card for violent conduct on Al Khulaif.