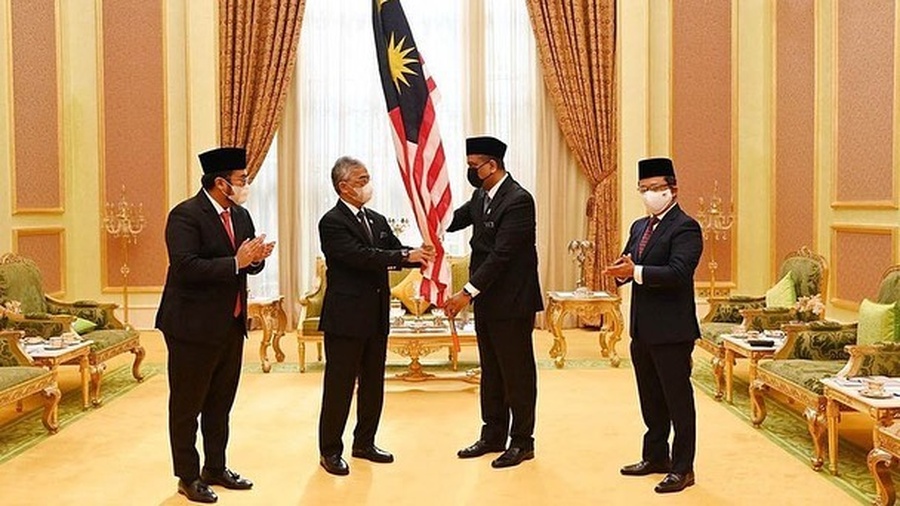 Kuala Lumpur, Malaysia, July 7, 2021: The King of Malaysia, His Majesty Sultan Abdullah Ahmad Shah, handed over the national flag to the Tokyo-bound Olympic and Paralympic delegation at the National Palace on Tuesday, July 6.

Datuk Seri Reezal Merican Naina Merican, Minister of Youth and Sports, received the Jalur Gemilang from His Majesty on behalf of the contingent.

His Majesty was briefed on the preparations of the team and said he hoped they could showcase their best performance at the Olympic and Paralympic Games and attract global attention to Malaysia. He also asked Malaysians back home and around the world to support the athletes so they could reach their targets.

Topics discussed included final preparations of the team for Tokyo, in particular the covid countermeasures in place before, during and after the journey.

Among the measures taken to ensure the safety and security of the athletes and officials are: PCR tests prior to departure; physical distancing and wearing Level 1 PPE consisting of face masks and face shields while travelling; PCR test upon arrival and daily thereafter, in accordance with the Standard Operating Procedure set by the organising committee.

In other business, following a request by Khairul Anuar Mohamad (archery) to be excused as the male flagbearer at the July 23 opening ceremony due to a busy competition schedule, the OCM Executive Board nominated Lee Zii Jia (badminton), 23, in his place. Mixed doubles badminton specialist Goh Liu Ying will be the female flagbearer.