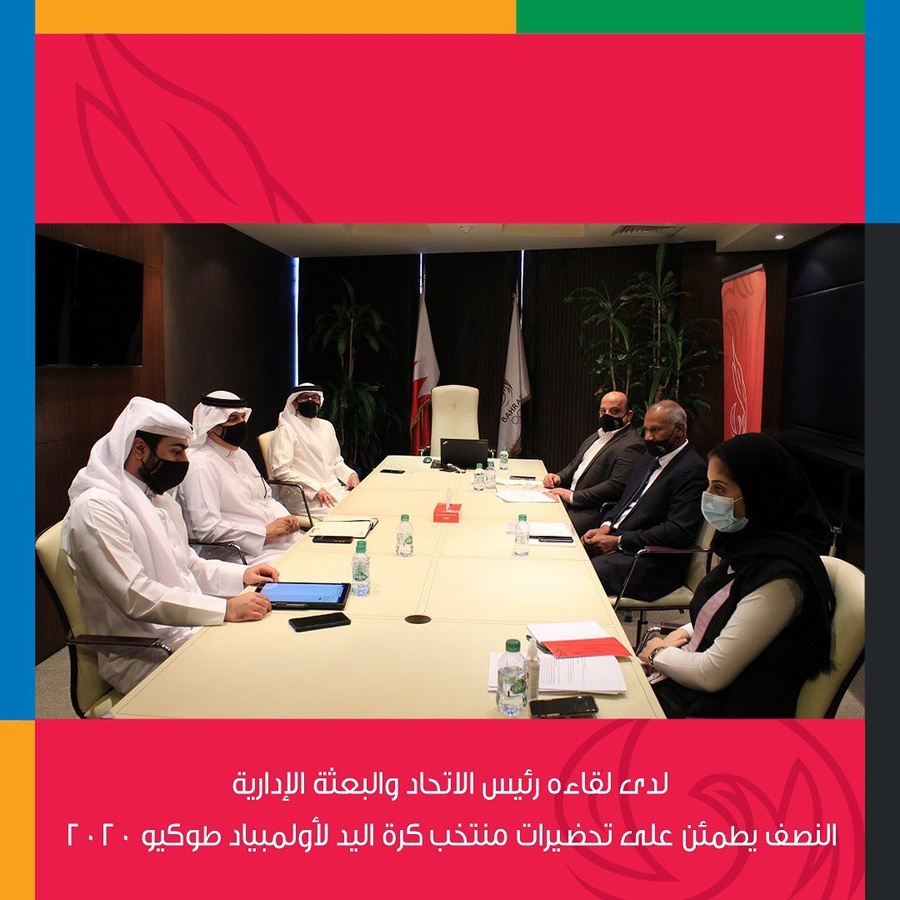 Manama, Bahrain, June 10, 2021: The Secretary General of the Bahrain Olympic Committee, His Excellency Mohamed Hasan Ali Al Nusuf, has confirmed his great pride in the achievements of the national men’s handball team in qualifying for the Olympic Games.

At a meeting with the Bahrain Handball Federation, the BOC Secretary General pledged the full support and continued commitment of the BOC President, His Highness Sheikh Khalid bin Hamad Al Khalifa. It is the goal of the BOC and sports authorities to provide the best possible environment and conditions for the team to prepare for Tokyo 2020 and compete in the Olympic Games.

The Bahrain Handball Federation delegation was led by the BHF President, HE Ali Mohamed Isa Eshaqi, and team manager Ismail Baqer, and the meeting was also attended by members of the administrative staff of the Bahrain delegation for Tokyo.

Al Nusuf heard a detailed explanation of the national team's preparations to date and the upcoming preparations and main requirements ahead of their Olympic participation, such as a training camp.

The meeting was in agreement that the meticulous preparations would contribute to the high performance of the team in Tokyo and boost the reputation of handball in the kingdom.

Al Nusuf urged the administrative team to work hard to overcome all obstacles and provide all the needs of the handball team; in turn, this would create a positive atmosphere for the players in the build-up to the Olympics, he added.

The BHF President expressed his sincere thanks and appreciation to the Bahrain Olympic Committee headed by His Highness Sheikh Khalid bin Hamad Al Khalifa for his support.

At the same time, the BHF appreciated the efforts of the BOC Secretary General in following up the affairs of the national team and said the handball team would be sports ambassadors in Tokyo.

Ranked 47 in the world by the International Handball Federation, Bahrain have been drawn in Group B with Egypt, Portugal, Sweden, Denmark and Japan. Group A is comprised of Argentina, Spain, Germany, France, Norway and Brazil. The top four teams in each group will advance to the quarter-finals.