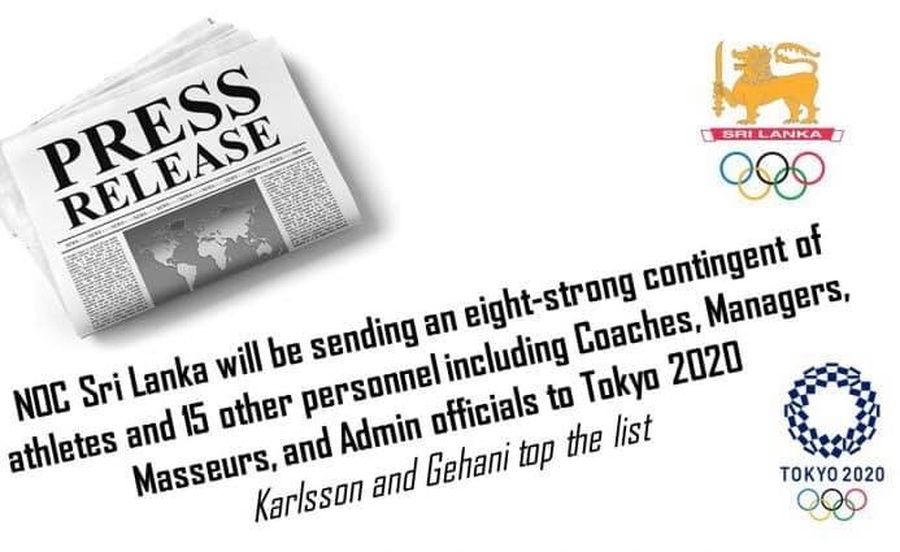 Colombo, Sri Lanka, May 30, 2021: The National Olympic Committee of Sri Lanka has announced that it will send an eight-strong squad of athletes for the Tokyo Olympics.

In a press release issued on Saturday, May 29, the Sri Lanka NOC said “thanks to a good relationship with the International Olympic Committee” the island nation was set to send a contingent of eight athletes and 15 other personnel including coaches, managers, masseurs and administrative staff for the July 23- August 8 Games.

Only two athletes have qualified for the Tokyo Olympics from Sri Lanka – show jumper Mathilda Karlsson and gymnast Milka Gehani. The other six will book their tickets courtesy of IOC invitation spots.

Sri Lanka-born Karlsson, who is based in Germany, is the first equestrian rider to qualify for the Olympics from the island, a landmark repeated in gymnastics by 2018 Youth Olympic Games representative Gehani. The Olympic Solidarity scholarship holder booked her berth after she topped the Asian Continental rankings.

The Sri Lanka Shooting Federation has confirmed that Sri Lanka Navy shooter Tehani Egodawela will receive an IOC Tripartite Commission invitation – given for smaller NOCs to be represented at the Games.

The Sri Lanka NOC also revealed that two invitation slots will be available in swimming and will go to star Matthew Abeysinghe – winner of a record seven gold medals and a silver medal at the 2019 South Asian Games in Nepal – and female swimmer Aniquh Gafoor.

The NOC is also hopeful of getting three more invitation slots in either badminton, judo, weightlifting or wrestling.