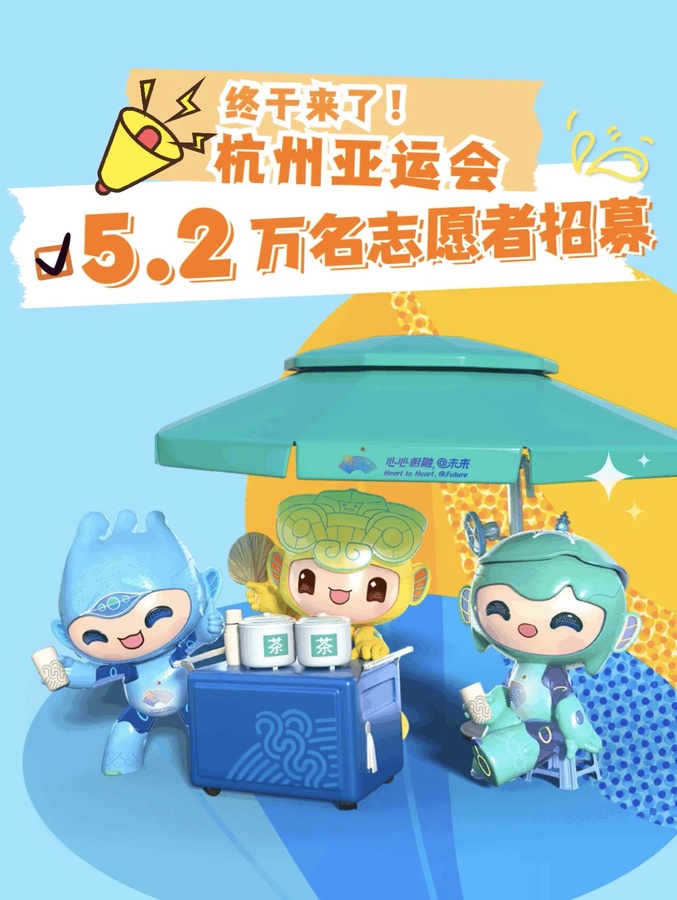 Hangzhou, China, April 21, 2021: The organising committee of the 19th Asian Games in Hangzhou, China in September 2022 made a major announcement today regarding the all-important volunteers.

HAGOC said that a six-month global campaign to recruit 52,000 volunteers for Hangzhou 2022 would be launched in May and that registration would be open until the end of October.

“The preliminary candidates will be determined in November 2021 and will need to go through interviews as well as psychological and English tests before March to be finally accepted as volunteers by May 2022,” HAGOC said.

The final cast of volunteers will then undertake a series of training sessions over the next three months to make sure they are qualified to deal with various aspects of Games operations, management and protocol.

With 55 competition venues in nine clusters throughout Zhejiang province in eastern China, and one main Asian Games Village with four satellite villages, HAGOC estimates that 52,000 volunteers will be required to make sure the 19th Asian Games runs smoothly and efficiently.

In other news from Hangzhou on April 21:

They include two of the main competition venues inside Hangzhou Olympic Park – the main stadium known as “Big Lotus” and the natatorium – and the comprehensive training centre.

The nearby aquatics centre has a capacity of 6,484 and will stage the swimming, diving and artistic swimming events at Hangzhou 2022. The water polo will be at a separate venue – the Huanglong Sports Centre located 18km from the Asian Games Village.

The training centre is one of 33 independent training venues across Zhejiang province, with 24 of them in Hangzhou.