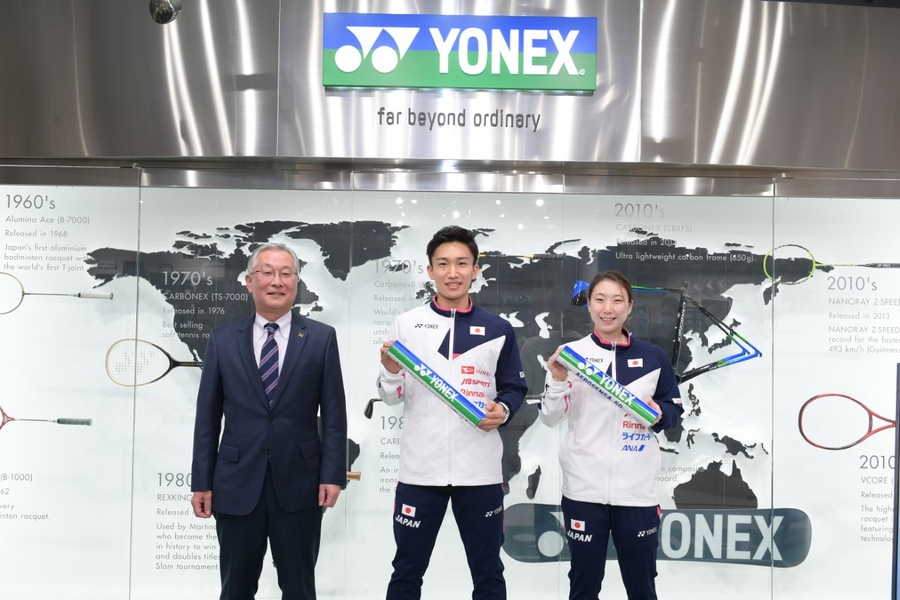 YONEX President Kusaki Hayashida is pictured with Japanese players with Kento Momota and Arisa Higashino at the YONEX sponsorship announcement in Tokyo on December 9. © YONEX

The agreement will see YONEX supply badminton equipment for players, technical officials and the Field of Play.

BWF General Secretary Thomas Lund said: “YONEX has been an innovator in the development of badminton equipment and continues to blaze the trail in revolution and technology.

"We are thrilled to have YONEX on board for badminton’s much anticipated return, in particular the staging of our signature event of the season, the HSBC BWF World Tour Finals.”

YONEX President Kusaki Hayashida added: “YONEX looks forward to working with BWF, all athletes and officials so that the enjoyment of badminton can be experienced again by badminton fans around the world.”

The list of athletes qualified for the HSBC BWF World Tour Finals will be confirmed at the conclusion of the TOYOTA Thailand Open.

The top eight players and pairs for each category in the HSBC BWF Road to Bangkok Rankings will be invited to compete, where only a maximum of two players or pairs per Member Association are eligible to participate in the World Tour Finals.

It is mandatory to enter both the YONEX Thailand Open and TOYOTA Thailand Open in order to be eligible to qualify for the HSBC BWF World Tour Finals.