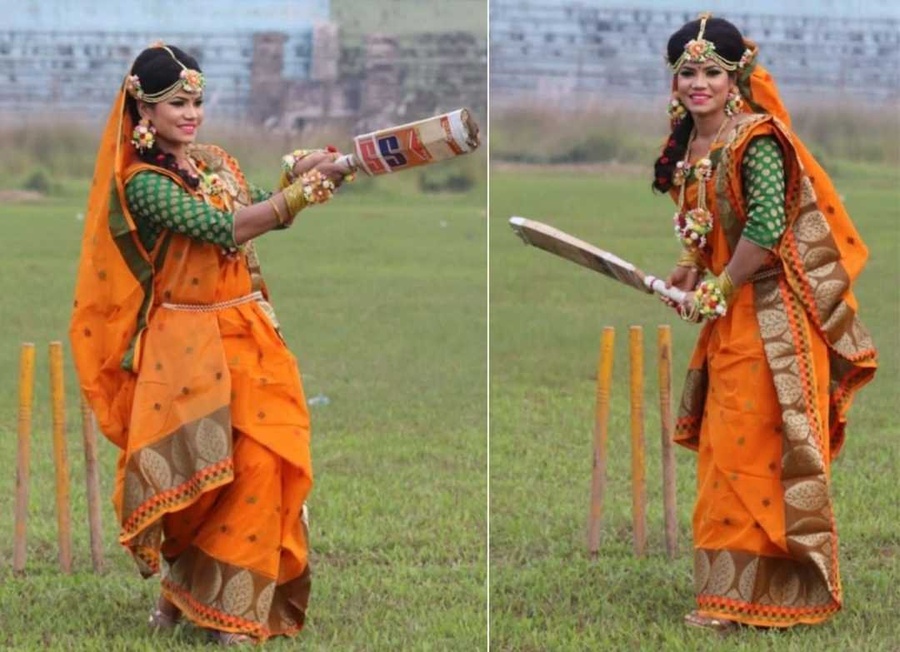 Dhaka, Bangladesh, October 30, 2020: Sanjida Islam's bat-wielding photos in her colourful bridal attire took the internet by storm in the last couple of days and brought her unprecedented attention from media across borders, reports the International Sports Press Association AIPS.

A member of the Bangladesh national women's cricket team, Sanjida married Mim Mosaddek, who is also a cricketer in the domestic circuit and plays for a regional team, on October 16 at Rangpur, a divisional town of Bangladesh.

Before the wedding ceremony, bride-to-be Sanjida along with a few of her cricket team companions went to the local stadium for a customary pre-wedding outdoor photo shoot.

But, after reaching the stadium and seeing some kids playing cricket, Sanjida could not hold herself back and tried to hit a few balls with the bat which created the beautiful moment.

“I, along with two other cricketers Sobhana Mustary and Hasnat Cynthia, went to the Rangpur Stadium to take some pictures in my ‘Gaye Holud' - a local custom where the elders rub turmeric paste on the bride's forehead as a sign of blessing - attire under the autumn sky amid catkins bushes.

“There I saw a few kids playing cricket with a tennis ball. As a cricketer I could not control my emotions and joined the game with those kids for a few moments. Sobhana took the pictures, I wasn't really posing ...it was pure and candid,” said Sanjida, who played 15 One Day Internationals and 54 T20 internationals for Bangladesh, winning the Asian Games silver medal at Incheon 2014.

She was also part of the Bangladesh team that clinched the title of Asia Cup in 2018 by beating India in the final, which is regarded as one of the highest achievements for Bangladesh in cricket so far.

The International Cricket Council put the pictures of Sanjida on their social media outlets where it caught the eyes of global media and soon she was featured in various social media platforms and news portals, including the Olympic Council of Asia.

Cricket brought the couple closer and Sanjida sought blessings from all the well-wishers for her new chapter of life.

“I am very overwhelmed and did not think that my photos would earn this much attention. Please pray for us,” she said.