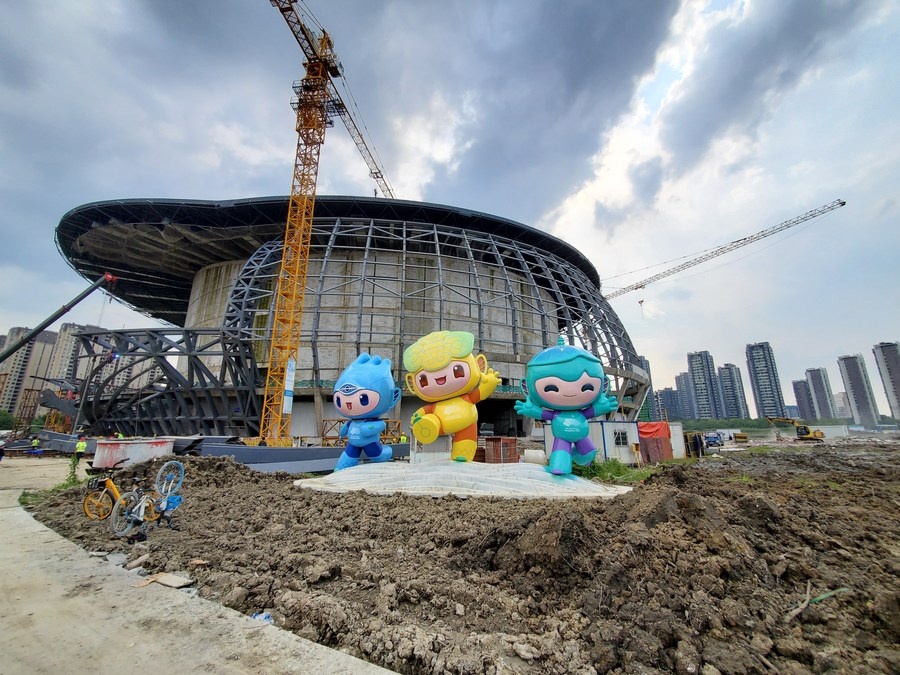 Hangzhou, China, October 5, 2020: Construction of the venues for the 19th Asian Games in Hangzhou, China in September 2022 continued unabated during the National Day holiday.

The holiday began on Thursday, October 1 and was a double celebration – China’s National Day and the first day of the Mid-Autumn Festival during which mooncake is traditionally given to family and friends.

But there was no such holiday for the Asian Games construction workers to ensure that the majority of the competition venues would be completed by March 2021. This will allow for three months of equipment installation and decoration through to June – 15 months before the 19th Asian Games runs from September 10-25, 2022.

Xinhua News spoke to some of the workers sacrificing their national holiday for the good of the Asian Games.

Wang Zhongxian lives not far from a construction site but, as chief of the project, going home for National Day was not among his options.

"For us constructors, holiday is a luxury," said Wang, who is in charge of construction of the Gongshu District Chengxi Sports Park Stadium and Gymnasium. Renovated from an urban village, it will host table tennis and hockey during the 19th Asian Games and become a public sports park afterwards.

"We are faced with a challenging task under a tight schedule. Although I'm close to home I can't go back," he said. "All of us miss our homes and families. I just can't leave my colleagues and workers here working while enjoy the holiday all alone."

He was joined by Yang Junkai. The 33-year-old project manager was unable to spend Chinese New Year with his family in January due to a tight schedule and the COVID-19 outbreak and National Day is the same.

"This is my last chance this year; of course I want to go back home, but the project is in a crucial phase right now which requires effort from every one of us,” said Yang.

Han Guoli, deputy chief of urban village renovation projects in Gongshu District, added: "Every day about 1,000 workers are on site and an additional 1,300 to 1,500 would be needed once we move to interior decoration and surrounding landscaping.

"We are confident we can finish the project as scheduled next year," Han said.

Thanks to their commitment, 41 of the 45 Games venues under construction will be finished by the end of March 2021, according to the Hangzhou 2022 organisers.