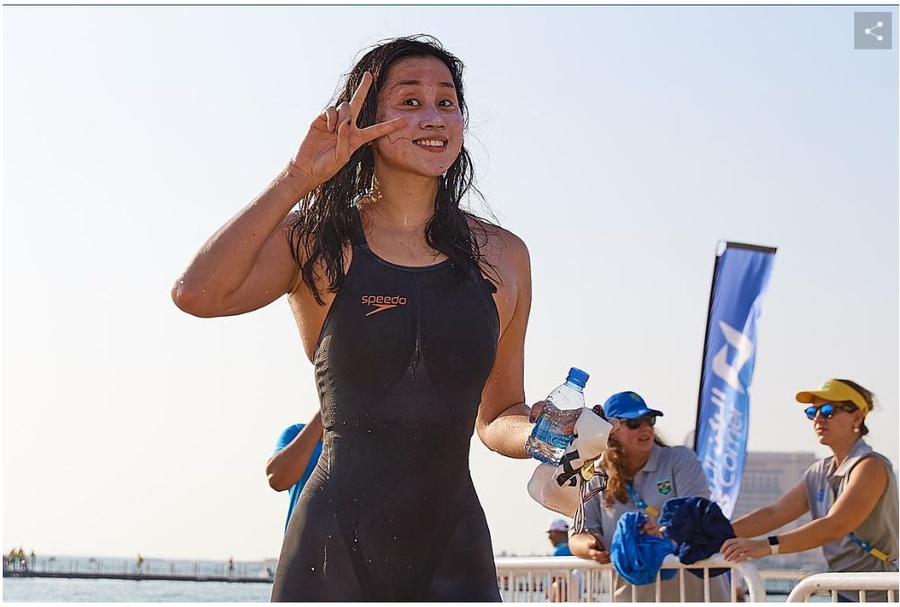 Doha, Qatar, October 13, 2019: Chinese swimmer Hou Yawen was just a fraction of a second away from making history at the inaugural ANOC World Beach Games in Doha, Qatar on Sunday.

In the first day of medal competition following the opening ceremony on Saturday night, the 21-year-old Hou took the silver medal in the women’s open water 5km swimming at Katara Beach.

Germany’s Leonie Beck took the bronze medal in 59.53 minutes while China’s Qu Fang was fifth in 1 hour exactly, 0.09 seconds behind the new champion.

Hou hails from Dalian in Liaoning province, north-east China, and enjoyed playing in the sea so much that her parents sent her to learn to swim at the age of five.

It proved to be a good move as, in 2014, she was named an Elite Athlete of National Class by the General Administration of Sport of China and she represented her country in the women’s 800m freestyle at the Rio 2016 Olympic Games.

Her ambition now is to compete at the 2020 Olympic Games in Tokyo, so her silver medal in Doha will give her further encouragement to make a second Olympic appearance next summer.

Double delight for Qatar on opening day of ANOC WBG
Doha, Qatar, October 11, 2019: Host nation Qatar made a blistering start in men’s handball as the...