Double delight for Qatar on opening day of ANOC WBG 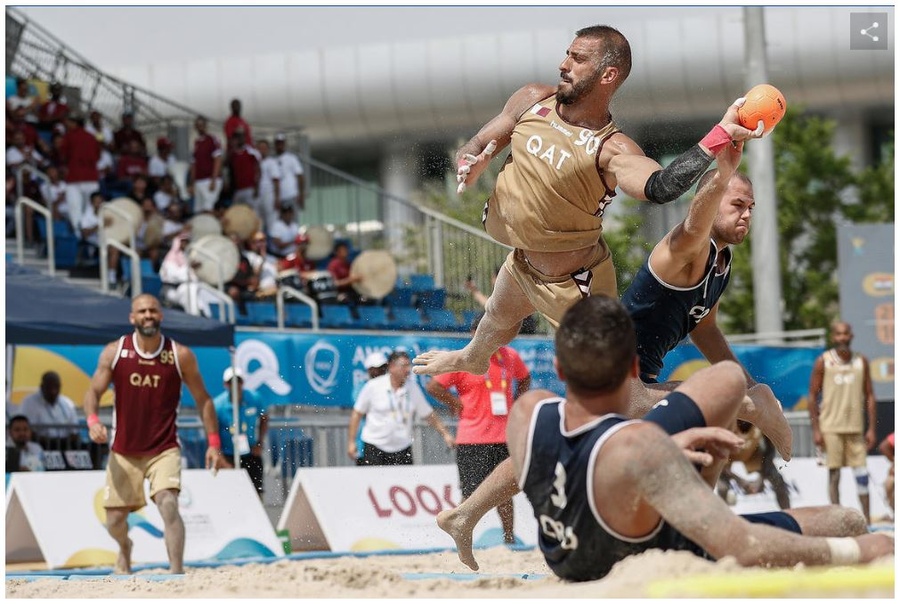 Doha, Qatar, October 11, 2019: Host nation Qatar made a blistering start in men’s handball as the preliminary rounds of the inaugural ANOC World Beach Games got under way in Doha on Friday.

Qatar won two Group B matches in thrilling style over European powerhouses Croatia and Hungary, both in nerve-tingling shootouts after the teams had shared two sets of energy-sapping action.

Qatar opened against Croatia at the Al-Gharafa Beach Venue. Croatia won the first period 21-16 but the Qataris battled back to take the second 17-16, setting up a shootout.

The home team won the decider 9-6 to record a famous 2-1 victory and make a spectacular winning start to their own ANOC World Beach Games.

In the evening games in men’s Group B, Qatar overcame Hungary 2-1 to complete a memorable opening day for the host nation.

Hungary won a close first set 20-18 but Qatar came back strongly again to take the second period 18-14 and force a shootout.

Qatar kept their nerve in a tense finale to win 7-4 and clinch their second 2-1 victory of the day, following their earlier victory over Croatia.

Iran looked dead and buried when they trailed Ukraine 4-1 at the end of the first of three periods. After clawing one back in the second frame, Iran then turned on the style to score three times in the third period and complete a famous victory 5-4.

The highlight for Iran was an astonishing goal by Amir Akbari Fartkhouni to make the score 1-1.

The Iranian player, deep in his own half on the right side of the pitch, sidefooted a clearance with such accuracy and skill that it sailed over the Ukrainian keeper for a sparkling individual goal.

In women’s handball, Vietnam lost a shootout to Spain before beating Poland later in the day, also in a shootout.

The Poles won the first set 21-20 but the Vietnamese, showing their resilience and fitness again, drew level by taking the second set 22-16 to force the shootout. Vietnam held their nerve to come home 7-4 in the shootout and win 2-1.

The first ANOC WBG officially opens on Saturday and runs from October 12-16 with over 1,200 athletes from 97 National Olympic Committees in 14 disciplines of 13 sports.