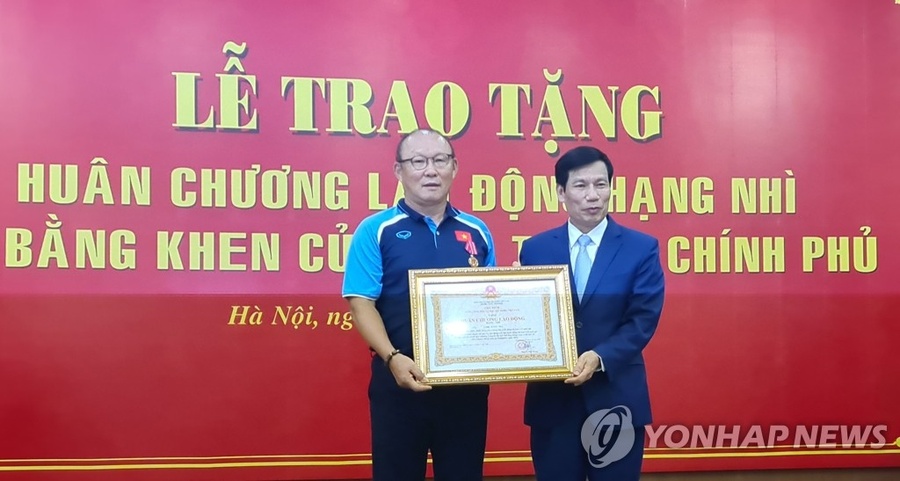 Park Hang-seo receives the second class Order of Labour from the Vietnamese government on August 27, 2020. © Yonhap

Hanoi, Vietnam, August 28, 2020: One of the success stories in Asian football recently has been the rise of the men’s national team of Vietnam.

At the 18th Asian Games in Indonesia in 2018, Vietnam reached the semi-finals before losing 3-1 to the eventual champions South Korea, who were led by Tottenham Hotspur striker Son Heung-min.

A year later, in December 2019, Vietnam won Southeast Asian Games gold for the first time in history at the 30th SEA Games in the Philippines, beating Indonesia 3-0 in the final – a victory which sparked mass celebrations on the streets of Vietnam.

Now, the Korean head coach of the Vietnamese team, Park Hang-seo, has received a state badge of honour for his accomplishments in his adopted home, reports Yonhap News.

The Vietnamese government bestowed the second class Order of Labour upon Park at a ceremony at the Vietnam Football Federation headquarters in Hanoi on Thursday.

This award is given to individuals with outstanding achievements in labour, creativity or national construction. Park is the first foreign national to receive a Labour Order in Vietnamese football.

Park has worked magic with both the senior men's and the under-23 men's teams in Vietnam since taking over in October 2017.