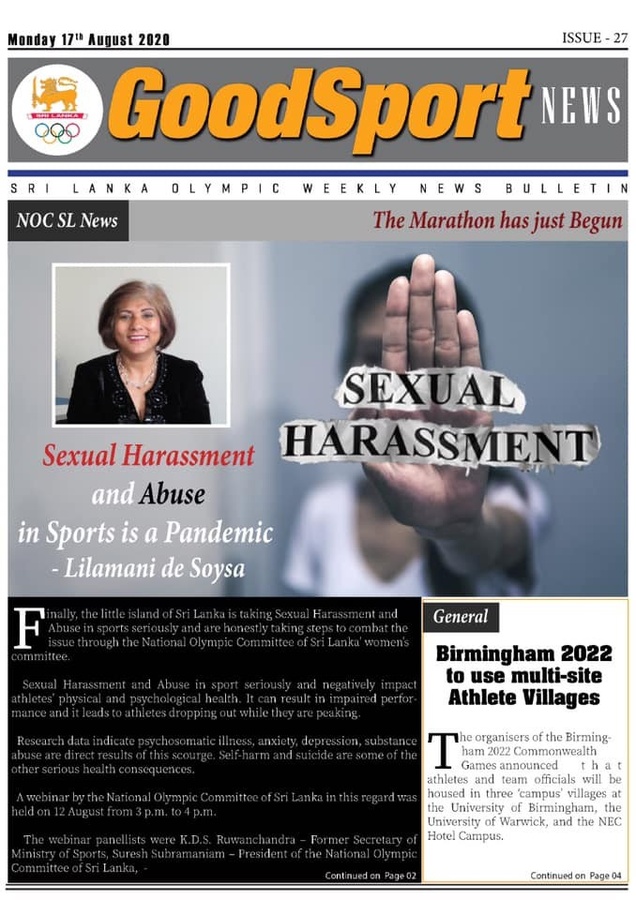 Colombo, Sri Lanka, August 19, 2020: A webinar on "Sexual Harassment and Abuse in Sport: A Hidden Scourge" was held by the National Olympic Committee of Sri Lanka on August 12.

Lilamani de Soysa, council member of the International Working Group on Women and Sport and international sports consultant based in Lausanne, Switzerland, gave the keynote address at the webinar which was organised by Sri Lanka NOC’s women’s committee.

De Soysa said: “The policy put in place is a big step forward for the Sri Lanka NOC. It is a very difficult topic to talk about. It is painful to the victims and is a subject that is covered in shame and taboo. It damages everything that modern sport is supposed to be founded on, that is respect and dignity.

“There are some serious double standards that have to be addressed and it is not easy to do so without a change in mindset. We can call it anything you like – abuse, harassment. It is criminal.

When you look at the history, this is a pandemic, where nobody is rushing to arrive at a solution.”

De Soysa, who is Sri Lankan, revealed she was well aware that abuse and harassment was alive in the island nation. “When I was in a Lankan university I was ragged by boys.

They surrounded me and used bad language. This exists in all aspects of society. But in sport it is a new topic and only in the last 15 years have we been talking about harassment in sport.

“Only since the late 1990s and early 2000 have sports authorities put in place systems and structures to address such issues and respond to complaints. But coming up with policies is easy, implementing them is hard.”

She presented many examples worldwide of how athletes had been abused by coaches, doctors and even high officials in sports bodies.