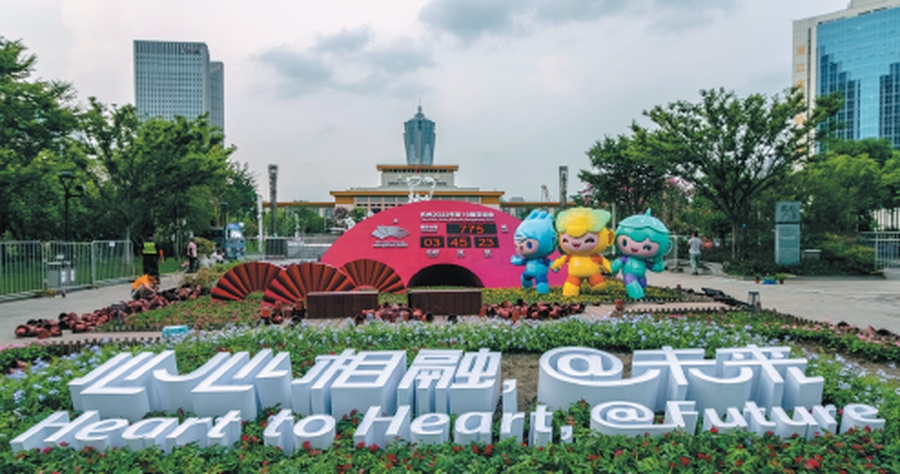 The countdown clock and mascots at Wulin Square in downtown Hangzhou on July 27. © Xiao Da/China Daily

With the fan-shaped “Tides Surging” emblem, mascots and “Heart to Heart, @Future” slogan all in the public domain, organising committee HAGOC is now busy enhancing the profile of the Games and increasing public awareness with over two years to go.

Organisers say the mascot triplets and other aspects of the 19th Asian Games reflect both the history and the modern dynamics of the city and province and will leave a rich artistic and cultural legacy.

Yang Meng, deputy director of the Press and Public Relations Department of HAGOC, hailed the visual designs for the Asian Games as embodiments of the unique qualities of the city, such as the well-protected nature and the fast-developing internet industry.

For the emblem, he said, as one of the most basic design elements, it is not just the symbol of the event but also a foundation for the designs of other visual products, including the slogan and mascots.

"In the future they will be closely combined with official activities and products in Hangzhou," Yang said.

Song Jianming, a professor at the China Academy of Art and director of the design sector of the Games, said thousands of athletes and sports lovers would gather in Hangzhou and the “look” of the Games would be visible all around the city through the mascots, emblem, sport pictograms and other promotional materials.

The 19th Asian Games will be held from September 10-25, 2022 in Hangzhou, capital of Zhejiang province in eastern China.