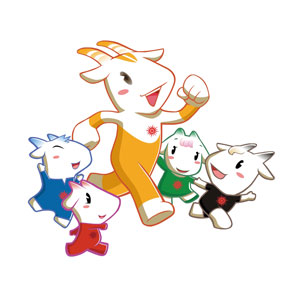 “Le Yangyang” is name of the leader of our five Goats and the name which refers to all of the 16th Asian Games Mascots, each of them sporty and cute, and each serving as an Official Mascot. The Mascots embody a part of Guangzhou’s unique history and culture and each Goat has an individual name that is distinctly Cantonese in style: A Xiang, A He, A Ru, A Yi and Le Yangyang.

When you put their names together, Xiang He Ru Yi Le Yangyang - meaning Peace, Harmony and Great Happiness, with everything going as you wish - they fully express the people of Guangzhou’s hope that the 16th Asian Games bring peace, prosperity, success and happiness to the people of Asia and fulfill their, and our, Vision of a “Thrilling Games and Harmonious Asia”.

The designs of the Mascots are strongly inspired by a legend about the City of Guangzhou: As the legend goes: A long time ago, the farm lands in Guangzhou ran dry, food could not be grown and the people experienced a famine. They could do nothing but pray to the heavens for luck.

Moved by their piety, Five Immortals descended from the heavens, riding on goats with coats of different colors, each holding ears of rice in its mouth. The Immortals gave the rice ears to the people of Guangzhou and promised that the land would be “free from famine”.

Afterwards, the Immortals disappeared into the sky. The Five Goats that were left behind turned into stone. From that time onwards, Guangzhou reaped a bumper harvest of grain every year and became the most prosperous city in the south of China. The Five Goats of this thousand-year-old legend have gone on become the most well-known symbol of Guangzhou.

The goat is also considered an auspicious animal that brings luck, in other Asian cultures. Through our choice of a goat, we sincerely believe our Mascots will appeal to, and resonate with, people of different cultures and religions throughout Asia, who we hope will grow to love them as much as we do.