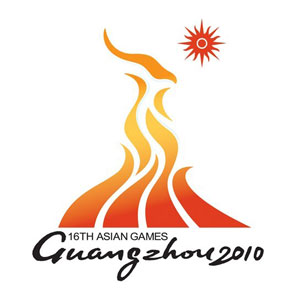 The design of the Games emblem is derived from a legend about the City of Guangzhou: As the legend goes, a long time ago, the farm lands in Guangzhou ran dry, food could not be grown and the people experienced a famine. They could do nothing but pray to the heavens for luck. Moved by their piety, Five Immortals descended from the sky, riding on goats with coats of different colors, each holding rice ears in its mouth. The Immortals gave the rice ears to the people and declared that the land would be free from famine.

Afterwards, they disappeared into the sky. The five goats that were left behind turn into stone. From that time on, Guangzhou reaped a bumper harvest of grain every year and grew into one of the most prosperous cities in China.

The Statue of the Five Goats in Guangzhou's Yue Xiu Park is a reminder of this legend and has, over the years, become the symbol of the city and one of its most well known landmarks.

The beloved goat is embodied in the emblem design, representing Guangzhou its people and their readiness to embrace the 2010 Asian Games and present the best of the city to people across Asia and the world.

The soft and uplifting lines in the emblem design outlines a contour of the Five Goats that is identical to the shape of a torch. The design of the emblem, a combination of the concrete and the abstract, of grace and ease, manifests the ever-burning sacred flame of the Asian Games. The emblem represents a perfect symbol of Guangzhou, the best wishes of its people, and the dynamics of the Asian Games.