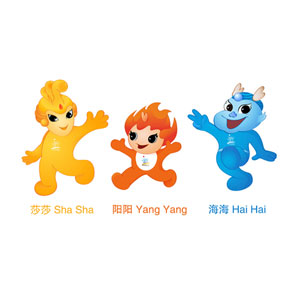 The mascots of the 3rd Asian Games are three Cartoon images named Hai Hai, Yang Yang and Sha Sha. With the Dragon, the phoenix, and the sun as archetypes, the mascots represent the seawater, the sunshine and the beach respectively. Reserving the creativity of "intimacy among family member" as the emblem implies, the images compose a harmonious view of a happy family of three, symbolizing the closeness like a family among the Asian people,“sharing the joy", and the joyful spirits of the sports.

Among the three images, the dragon and the phoenix are the most representative fantastic animals in Chinese folklores. The phoenix and the sun are the regional characteristics of Haiyang; meanwhile, the sun is one of the key elements of the OCA logo.

The mascots as a whole reflect the concepts of “Dragon and phoenix Bring Prosperity" and“Nature and Man re One", showing the best wishes the Haiyang city hopes to extend to Asia and the world through the Asian Beach Games.

The designing originated from the idiom“Dragon and phoenix Bring Prosperity“. The overall image takes dragon as the archetype with the color of ocean bleu, showing the close relationship between dragon and the sea, as well as the regional characteristics of Haiyang. The costume of the mascot evolved from the cultural features and the joyful sense of life.

The image, which is the little sun of the family, is lively and lovely. The color of red as the rising sun is used to comply with hosting concepts of the Games showing the regional characteristics of Haiyang, the host city of the Games, as well as the enthusiasm of welcoming the Games of Haiyang people.

The designing is inspired by the beautiful legend of Haiyang phoenix Beach. Deriving from the image of phoenix, and applying the color of sandy tawny, the overall image integrate the mascot and the legend artfully with passion  and fashion, which is closely connected with the hosting concepts of “Sand and sun, Passion and Fashion" of the 3rd Asian Beach Games.